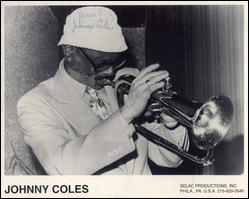 Coles, nicknamed "Little Johnny C", recorded as a leader several times over the course of his career. He died of cancer in 1997.

This article uses material from the article Johnny Coles from the free encyclopedia Wikipedia and it is licensed under the GNU Free Documentation License.

Unforgettable Dave Lee
Update Required To play the media you will need to either update your browser to a recent version or update your Flash plugin.