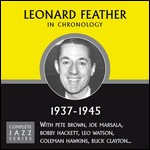 Leonard Geoffrey Feather (13 September 1914 – 22 September 1994) was a British-born jazz pianist, composer, and producer who was best known for his music journalism and other writing.

Feather was born in London into an upper middle-class Jewish family. He learned to play the piano and clarinet without formal training and started writing about jazz and film by his late teens. At the age of twenty-one, Feather made his first visit to the United States, and after working in the UK and the US as a record producer finally settled in New York City in 1939, where he lived until moving to Los Angeles in 1960. Feather was co-editor of Metronome magazine[1] and served as chief jazz critic for the Los Angeles Times until his death.

Feather's compositions have been widely recorded, including "Evil Gal Blues" and "Blowtop Blues" by Dinah Washington, and what is possibly his biggest hit, "How Blue Can You Get?" by blues artists Louis Jordan and B.B. King. But it was as a writer on jazz (as a journalist, critic, historian, and campaigner) that he made his biggest mark: "Feather was for a long time the most widely read and most influential writer on jazz."[2] Even jazz enthusiasts who didn't read his books and articles would have known him from the liner notes that he wrote for hundreds of jazz albums. He also has a radio show called "Platterbrains" that aired from 1953 to 1958. Feather organized the first Carnegie Hall jazz concerts, the only two jazz concerts at the original Metropolitan Opera House.[3]

He wrote the lyrics to the jazz song "Whisper Not", which was recorded by Ella Fitzgerald on her 1966 Verve release of the same name.

In 1984, Feather was awarded an Honorary Doctorate of Music from Berklee College of Music.[4]

Feather's archives are part of the International Jazz Collections at the University of Idaho Library.[5]

Feather died from complications of pneumonia in Encino, California, at the age of 80. He was the father of lyricist and songwriter Lorraine Feather.[6]

This article uses material from the article Leonard Feather from the free encyclopedia Wikipedia and it is licensed under the GNU Free Documentation License.