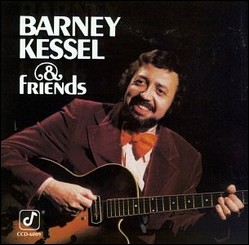 Barney Kessel (October 17, 1923 – May 6, 2004) was an American jazz guitarist born in Muskogee, Oklahoma. Noted in particular for his knowledge of chords and inversions and chord-based melodies, he was a member of many prominent jazz groups as well as a "first call" guitarist for studio, film, and television recording sessions. Kessel was a member of the group of session musicians informally known as the Wrecking Crew.

Kessel began his career as a teenager touring with local dance bands. When he was 16, he started playing with the Oklahoma A & M band, "Hal Price & the Varsitonians". The band members lovingly nicknamed him "Fruitcake" because he used to practice up to 16 hours a day. He then moved on to bands such as that led by Chico Marx. He quickly established himself as a key post-Charlie Christian jazz guitarist. In 1944 he participated in the film Jammin' the Blues, which featured Lester Young, and in 1947 he recorded with Charlie Parker's New Stars on the Relaxin' at Camarillo session for Dial Records.[1] He was rated the No. 1 guitarist in Esquire, Down Beat, and Playboy magazine polls between 1947 and 1960.[2]

Kessel was known for his innovative work in the guitar trio setting. In the 1950s, he made a series of four albums called The Poll Winners with Ray Brown on bass and Shelly Manne on drums. He was also the guitarist on the album Julie Is Her Name (1955) by Julie London, which includes the standard "Cry Me a River"; this million-selling song features a guitar part from Kessel which illustrates his melodic chordal approach in a minimal jazz group.[3] Also from the 1950s, his three Kessel Plays Standards volumes contain some of his most polished work.

Kessel was also a member of the Oscar Peterson Trio with Ray Brown for a year, leaving in 1953. The guitar chair was called the hardest gig in show business since Peterson often liked to play at breakneck tempos. Herb Ellis took over from Kessel. Kessel also played with Sonny Rollins in the late 1950s and can be heard on the Sonny Rollins and the Contemporary Leaders album on songs like "How High the Moon".

In 1956, Barney Kessel was introduced to the Kay Musical Instrument Company while playing at a local jazz club in Chicago. The next year, in 1957, he was offered three signature models, the K1700 (Pro), K6700 (Artist) and K8700 (Jazz Special) in the endorsement and each bore his signature etched into the underside of the pickguard. This was also the introduction of the "full kelvinator" headstock.

Barney Kessel was the winner of the prestigious Down Beat magazine readers poll in 1956, '57 and '58 and played the Kay Jazz Special K8700 exclusively during that era. In 1960, Barney left Kay but the production of these guitars continued without his signature. In 2014, the Kay Guitar Company, working closely with Kessel's widow Phyllis, secured the licensing rights from the Kessel estate to reissue these three guitars.

Kessel was a "first call" guitarist at Columbia Pictures during the 1960s, and became one of the most in-demand session guitarists in America, and is considered a key member of the group of first-call session musicians now usually known as The Wrecking Crew. In this capacity he played on hundreds of famous pop recordings, including albums and singles by Phil Spector, The Beach Boys, The Monkees and many others. He appeared in an acting part playing a jazz guitarist named "Barney" in one episode of the Perry Mason TV show. He also wrote and arranged the source music, including a jazz version of "Here Comes the Bride", provided by the jazz combo that featured in the story.

In 1961 The Gibson Guitar Corporation introduced The Barney Kessel model guitar onto the market and continued to make them until 1973. One custom instrument Kessel played was essentially a 12-string guitar neck attached to a mandolin body (similar to Vox's mando guitar), which may have been played on the intro to The Beach Boys' "Wouldn't It Be Nice".

During the 1970s, Kessel presented his seminar "The Effective Guitarist" in various locations around the world, and performed extensively with Herb Ellis and Charlie Byrd as "The Great Guitars".

On Pete Townshend's 1983 album Scoop, Townshend paid homage to the guitarist with the instrumental song "To Barney Kessel".

Kessel was married to B. J. Baker. They were divorced in 1980. Kessel's sons Dan and David also became record producers and session musicians, working with Phil Spector, John Lennon, Cher and Leonard Cohen.[5]

With Dexter Gordon and others

With Art Pepper and Zoot Sims

This article uses material from the article Barney Kessel from the free encyclopedia Wikipedia and it is licensed under the GNU Free Documentation License.