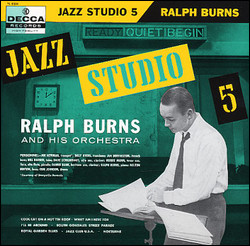 Burns was born in Newton, Massachusetts where he began playing the piano as a child. In 1938, he attended the New England Conservatory of Music. He admitted that he learned the most about jazz by transcribing the works of Count Basie, Benny Goodman and Duke Ellington. While a student, Burns lived in Frances Wayne's home. Wayne was already a well-known big band singer and her brother Nick Jerret was a bandleader who began working with Burns. He found himself in the company of such famous performers as Nat King Cole and Art Tatum.

After Burns moved to New York in the early 1940s, he met Charlie Barnet and the two began working together. In 1944, he joined the Woody Herman band with members Neal Hefti, Bill Harris, Flip Phillips, Chubby Jackson and Dave Tough. Together, the group developed a powerful and distinctive sound. For 15 years, Burns wrote or arranged many of the band's major hits including "Bijou", "Northwest Passage" and "Apple Honey", and on the longer work "Lady McGowan's Dream" and the three-part Summer Sequence.

Burns worked with numerous other musicians. Stan Getz was featured as a tenor saxophone soloist on "Early Autumn", a huge hit for the band and the launching platform for Getz's solo career. Burns also worked in a small band with soloists including Bill Harris and Charlie Ventura.

The success of the Herman band provided Burns the ability to record under his own name in the 1950s. In the 1950s Burns played nightly from 5pm -9pm in The Baroque Room at Oscar's Delmonico restaurant in Downtown Manhattan. He collaborated with Billy Strayhorn, Lee Konitz and Ben Webster to create both jazz and classical recordings. He wrote compositions for Tony Bennett and Johnny Mathis and later Aretha Franklin and Natalie Cole. Burns was responsible for the arrangement and introduction of a string orchestra on two of Ray Charles's biggest hits, "Come Rain or Come Shine" and "Georgia on My Mind". In the 1990s, Burns arranged music for Mel Tormé, John Pizzarelli, Michael Feinstein and Tony Bennett.

In the 1960s, Burns was freed from touring as a band pianist, and began arranging/orchestrating for Broadway including the major show Chicago, Funny Girl, No, No, Nanette, and Sweet Charity. In 1971, Burns first film assignment was for Woody Allen's Bananas. Burns worked with film-director Bob Fosse and in 1972 won the Academy Award as music supervisor for Cabaret. He composed the film scores for Lenny (1974) and Martin Scorsese's jazz-themed New York, New York (1977). Fosse again employed Burns to create the soundtrack for All That Jazz for which he also won an Academy Award in 1979. He then worked on Urban Cowboy (1980) and in 1982, Burns received another Academy Award nomination for his work in Annie.

His work for the stage was also notable. Baryshnikov on Broadway in 1980 earned Burns an Emmy Award for his work. Burns won the Tony Award for Best Orchestrations in 1999 for Fosse and posthumously in 2002 for Thoroughly Modern Millie, which also garnered him the Drama Desk Award for Outstanding Orchestrations. The latter were won with Doug Besterman. From 1996 until his death, Burns restored many orchestrations for New York City Center's Encores! series — revivals of both his own shows and shows originally orchestrated by others.[1] Burns was inducted into the New England Jazz Hall of Fame in 2004.

Burns carefully hid his homosexuality throughout his life.[2] In 2001, Burns died from complications of a recent stroke and pneumonia in Los Angeles, California and was buried on April 13, 2002 in Newton.[3] He was survived by one sister, Nancy Lane (Burns), and three brothers, Leo, Joe, and Gael.

This article uses material from the article Ralph Burns from the free encyclopedia Wikipedia and it is licensed under the GNU Free Documentation License.

Hymn To Freedom Piccadilly Six + One
Update Required To play the media you will need to either update your browser to a recent version or update your Flash plugin.