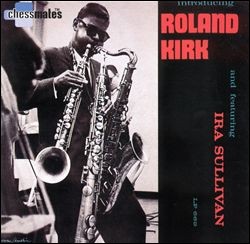 Rahsaan Roland Kirk (August 7, 1935[1] December 5, 1977) was an American jazz multi-instrumentalist who played tenor saxophone, flute and many other instruments. He was renowned for his onstage vitality, during which virtuoso improvisation was accompanied by comic banter, political ranting, and the ability to play several instruments simultaneously.

Kirk was born Ronald Theodore Kirk[1] in Columbus, Ohio, but felt compelled by a dream to transpose two letters in his first name to make Roland. He became blind at an early age as a result of poor medical treatment.[2] In 1970, Kirk added "Rahsaan" to his name after hearing it in a dream.

Preferring to lead his own bands, Kirk rarely performed as a sideman, although he did record with arranger Quincy Jones and drummer Roy Haynes and had notable stints with bassist Charles Mingus. One of his best-known recorded performances is the lead flute and solo on Jones' "Soul Bossa Nova", a 1964 hit song repopularized in the Austin Powers films (Jones 1964; McLeod et al. 1997).

His playing was generally rooted in soul jazz or hard bop, but Kirk's knowledge of jazz history allowed him to draw on many elements of the music's past, from ragtime to swing and free jazz. Kirk also absorbed classical influences, and his artistry reflected elements of pop music by composers such as Smokey Robinson and Burt Bacharach, as well as Duke Ellington, John Coltrane and other jazz musicians. The live album Bright Moments (1973) is an example of one of his shows. His main instrument was the tenor saxophone, supplemented by other saxes, and contrasted with the lighter sound of the flute. At times he would play a number of these horns at once, harmonizing with himself, or sustain a note for lengthy durations by using circular breathing, or play the rare, seldom heard nose flute. A number of his instruments were exotic or homemade, but even while playing two or three saxophones at once, the music was intricate, powerful jazz with a strong feel for the blues.

Kirk was politically outspoken. During his concerts, between songs he often talked about topical issues, including black history and the civil rights movement. His monologues were often laced with satire and absurdist humor. According to comedian Jay Leno, when Leno toured with Kirk as Kirk's opening act, Kirk would introduce him by saying, "I want to introduce a young brother who knows the black experience and knows all about the white devils .... Please welcome Jay Leno!"[3]

In 1975, Kirk suffered a major stroke which led to partial paralysis of one side of his body. However, he continued to perform and record, modifying his instruments to enable him to play with one arm. At a live performance at Ronnie Scott's club in London he even managed to play two instruments, and carried on to tour internationally and even appear on television.

He died from a second stroke in 1977 after performing in the Frangipani Room of the Indiana University Student Union in Bloomington, Indiana.[4]

Kirk played and collected a number of musical instruments, mainly various saxophones, clarinets and flutes. His main instruments were tenor saxophone and two obscure saxophones: the stritch (a straight alto sax lacking the instrument's characteristic upturned bell) and a manzello (a modified saxello soprano sax, with a larger, upturned bell). Kirk modified these instruments himself to accommodate his simultaneous playing technique.

He typically appeared on stage with all three horns hanging around his neck, as well as a variety of other instruments, including flutes and whistles, and often kept a gong within reach. Kirk also played clarinet, harmonica, English horn, and recorders, and was a competent trumpeter. He often had unique approaches, using a saxophone mouthpiece on a trumpet or playing nose flute. He additionally used many non-musical devices, such as alarm clocks, sirens, or a section of common garden hose (dubbed "the black mystery pipes"). His studio recordings also used tape-manipulated musique concrète, and primitive electronic sounds (before such things became commonplace).

Some have suggested that Kirk's unique onstage appearance and simultaneous multi-instrumentalism were gimmicks to the point of linking these to his blindness , but Kirk's and playing and performance tended to silence these ideas. He used the multiple horns to play true chords, essentially functioning as a one-man saxophone section. Kirk insisted that he was only trying to emulate the sounds he heard in his head.

Kirk was a major exponent of circular breathing. Using this technique, Kirk was not only able to sustain a single note for an extended period; he could also play sixteenth-note runs of almost unlimited length, and at high speeds. His circular breathing ability enabled him to record "Concerto For Saxophone" on the Prepare Thyself to Deal With a Miracle LP in one continuous take of about 20 minutes' playing with no discernible "break" for inhaling. His long-time producer at Atlantic Jazz, Joel Dorn, believed he should have received credit in The Guinness Book of World Records for such feats (he was capable of playing continuously "without taking a breath" for far longer than exhibited on that LP), but this never happened.

The Case of the 3 Sided Dream in Audio Color was a unique album in jazz and popular music recorded annals. It was a two-LP set, with Side 4 apparently "blank", the label not indicating any content. However, once word of "the secret message" got around among Rahsaan's fans, one would find that about 12 minutes into Side 4 appeared the first of two telephone answering machine messages recorded by Kirk, the second following soon thereafter (but separated by more blank grooves). The surprise impact of these segments appearing on "blank" Side 4 was lost on the CD reissue of this album. These spoken-word segments reflected the tenor of the times, so to speak, with the rather pessimistic theme that humanity had "blown" its chance to live in a world of peace and harmony. But this was entirely in keeping with the fact that, despite his loss at an early age of his sight, Rahsaan was very much on top of societal developments, racial and economic injustice and disparity. Indeed, he had participated many years previously in protests against the failure of TV show hosts such as Merv Griffin to hire any non-white musicians.

He gleaned information on what was happening in the world via audio media like radio and the sounds coming from TV sets. His later recordings often incorporated his spoken commentaries on current events, including Richard Nixon's involvement in the Watergate scandal. The 3-Sided Dream album was a "concept album", somewhat akin to the Beatles' "psychedelic" phase in the incorporation of "found" or environmental sounds and tape loops, tapes being played backwards, etc. Snippets of Billie Holiday singing are also heard briefly. The album even confronts the rise of influence of computers in society, as Rahsaan threatens to pull the plug on the machine trying to tell him what to do.

In the album [[Other Folks Music]] the spoken words of Paul Robeson can be briefly heard as well, showing that Kirk also respected other outspoken black artists.

This article uses material from the article Rahsaan Roland Kirk from the free encyclopedia Wikipedia and it is licensed under the GNU Free Documentation License.

We Three (My Echo, My Shadow And Me) Paul McCartney
Update Required To play the media you will need to either update your browser to a recent version or update your Flash plugin.