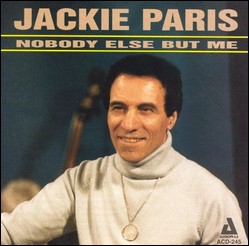 Paris was born in Nutley, New Jersey to an Italian-American family. His uncle Chick had been a guitarist with Paul Whiteman's orchestra. Paris was a popular child entertainer in vaudeville who shared the stage with Bill "Bojangles" Robinson and the Mills Brothers. He tap danced from his youth and into his years in the US Army.

After serving in the army during World War II, he was inspired by his friend Nat King Cole to assemble a trio featuring himself on guitar and vocals. The Jackie Paris Trio was a hit at the Onyx Club on New York's 52nd Street.

He recorded from the 1940s into the 2000s. His albums include Songs by Jackie Paris (EmArcy), Jackie Paris Sings the Lyrics of Ira Gershwin (Time), and The Song Is Paris (Impulse!). The first song that he recorded was "Skylark", on one of two sessions made by his trio for MGM Records in 1947. He recorded Thelonious Monk's "Round Midnight", which was produced by the critic Leonard Feather and featured a young Dick Hyman on piano.

In 1949, he toured with the Lionel Hampton Orchestra and was invited to join Duke Ellington's Orchestra, but he was too exhausted to take it. He was the only vocalist to tour as a regular member of the Charlie Parker Quintet. Unfortunately, no recordings exist of the Parker-Paris combination, but there is a photograph of the two working together. He worked often with Charles Mingus, who called Paris his favorite singer and recorded with him often, including 1952's "Paris in Blue" and "Duke Ellington's Sound of Love" on the album Changes Two in 1974.

He won many jazz polls and awards, including those of Down Beat, Playboy, Swing Journal, and Metronome. In 1953, he was named Best New Male Vocalist of the Year in the first Down Beat Critics Poll. The winning female vocalist was Ella Fitzgerald, who repeatedly named Paris as one of her favorites.

In 2001, Paris played to a standing room crowd — and to a standing ovation — at New York's Birdland jazz club in Times Square. He was virtually the only performer to have appeared at every incarnation of the famed night spot, from the legendary Birdland of the 1950s to the present.

He was praised by comic Lenny Bruce, who shared the bill with him on many occasions. Bruce said, "I dig his talent. The audience loves him and he gets laughs. He is too much!"[2]

This article uses material from the article Jackie Paris from the free encyclopedia Wikipedia and it is licensed under the GNU Free Documentation License.

Morgenstund' hat Gold im Mund Charly Antolini Jazz Power
Update Required To play the media you will need to either update your browser to a recent version or update your Flash plugin.