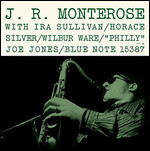 J.R. or JR (derived from Jr.) Monterose grew up in Utica, New York, where his family moved a few months after his birth. He began formal clarinet studies at thirteen, but was largely self-taught as a tenor saxophonist, which he took up at fifteen after hearing Glenn Miller band soloist Tex Beneke. His earliest influences were Coleman Hawkins and Chu Berry, but, as he told critic Leonard Feather, he also found harmonic inspiration in pianists, citing Bud Powell and the instruction of Utica-based guitarist and pianist Sam Mancuso in helping him learn how to use chord changes.

Monterose's first professional experience was playing in upstate New York territory dance bands (1947–49). In 1950 he joined Henry "Hot Lips" Busse's touring orchestra. After a brief return to Utica, he joined the Buddy Rich big band in late 1951. Though the band had some excellent bop-oriented musicians (Rich, Dave Schildkraut, Allen Eager and Philly Joe Jones) he soon left, citing the lack of soloing opportunities. "After six months I was drugged with my own playing," he declared in a 1956 interview, "and I went back home and spent the next couple of years working in little joints but with good men."[1]

The record of Monterose's life thereafter, however, is one of sparsely documented itinerancy, pursuing his evolving craft in small-time U.S. venues and during extended stays (late 1960s through the mid-1970s) in Belgium, The Netherlands and Denmark, with occasional low-profile recordings (In Action, Body and Soul) recorded in such places as Cedar Rapids, Iowa, and Wageningen, The Netherlands. His preference for small-group work in out of the way places would shape much of his subsequent career, contributing to the musical growth but relegating him to obscurity.

The last decade and a half of Monterose's life was spent at upstate New York venues, including the Lark Tavern in Albany. Live recordings at the Lark and other upstate New York venues such as Opus 40 have been released by Croscrane Records. His visit to play Copenhagen's Jazzhuz in 1988, recorded by Danish Broadcasting, has been released by Storyville under the title T.T.T. Other live recordings from his final years, when he was in less than robust health, are available on the Croscrane specialty label.

While Monterose considered himself an underground artist, his work, both as player and composer, remains esteemed by musicians, critics and aficionados of classic jazz. He never denied having been influenced by Stan Getz, Sonny Rollins and John Coltrane, but refused to be pigeonholed in any particular style. "I've tried all my life to avoid copying. If I can't be myself, there's no point being in jazz."[3] It was this uncompromising insistence on going his own way, both musically and geographically, that moved jazz historian and writer David Brent Johnson to describe Monterose as "The Best Tenor You Never Heard."[4]

With the René Thomas Quintet

With the George Wallington Quintet

This article uses material from the article J. R. Monterose from the free encyclopedia Wikipedia and it is licensed under the GNU Free Documentation License.