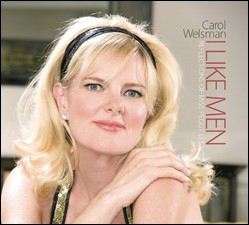 Carol Welsman (born September 29, 1960 in Toronto) is a Canadian jazz vocalist and pianist. She is the granddaughter of conductor/composer Frank Welsman and the sister of composer John Welsman. She has been nominated 5 times for the Juno Award.

Carol Welsman attended Boston's Berklee College of Music and majored in piano performance. She studied voice in Europe.
In 1990 she returned to Toronto and joined the Jazz Performance Faculty at the University of Toronto and in addition to giving private lessons developed a jazz vocal improvisation ensemble. Since then she has been teaching classes, clinics and workshops at colleges and universities both in Canada and the US. [1]

In 1995 she issued her first CD "Lucky to be me", with jazz standards and her own song "This Lullaby", which she presented on September 11, 2004 on the Larry King show commemorating 9/11.[2] The song was also adopted by Celine Dion on her 2004 "Miracle" CD as "Baby, Close Your Eyes". Welsman also wrote lyrics for several singers e. g. for Ray Charles, and Nicole Scherzinger of The Pussycat Dolls. Together with Herbie Hancock she co-hosted the 2000 Billboard Jazz Awards.

In 2005 she was the subject of a documentary called "Language of Love", produced by Stormy NIghts productions. Shot in Brazil, Italy and North America, Carol performs with Herbie Hancock, Brazilian superstar Djavan, and Romano Musumarra.

Carol Welsman's native language is English and so are most of her songs, but she also sings and teaches in French and a few of her songs are in Portuguese.

This article uses material from the article Carol Welsman from the free encyclopedia Wikipedia and it is licensed under the GNU Free Documentation License.