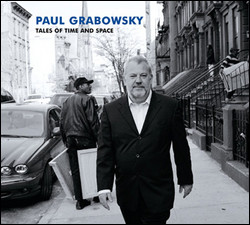 Grabowsky was born in 1958 in Lae, Papua New Guinea; his father Alistair had lived in Papua New Guinea with his wife Charlotte since the 1930s working on oil rigs, building roads, flying planes and playing the drums. His older brother Michael (born 1942) is also a musician (bass guitar) and worked as music coordinator/producer on some of Paul's films.[1]

Grabowsky grew up in Glen Waverley in suburban Melbourne, Victoria, Australia, and began piano lessons when he was five years old. He studied the classical repertoire with Mack Jost, senior lecturer in piano at the Conservatorium of Music at the University of Melbourne from the age of seven until his university years. He attended Wesley College and it was that school's jazz band which introduced him to the genre.

Immersing himself in jazz, Grabowsky dropped out of university. In 1978–1980 he worked in the Melbourne cabaret/comedy scene where he began his relationship with Steve Vizard and Robyn Archer. Assisted by a grant from the Australia Council for the Arts, he flew in 1980 to London where he travelled via Spain to Germany; he lived there in Munich until 1985. He had been back in Australia for Christmas 1982 when, on the invitation of Red Symons, he co-composed his first film score.

After his return to Australia in 1986, he played in various jazz ensembles, including The Wizards of Oz and the Groovematics. He also founded The Paul Grabowsky Trio with Gary Costello (bass) and Allan Browne (drums), which won ARIA Music Awards for its first CD (Six By Three) and in 1996 for its second CD, When Words Fail. During this time, he also wrote the score to the film The Last Days of Chez Nous and for television shows Phoenix, Janus and Fast Forward.

Grabowsky (as Count Paul Grabowsky) and the Groovematics were the house band on the Network Ten TV show Tonight Live with Steve Vizard from February 1990 to November 1993.

In 1990 he was commissioned to write several pieces for the Munich-based jazz/contemporary-music group Die Konferenz. One group of these was based on songs of Édith Piaf ("Et les Affaires Piaf"), while a second group was based on songs from German UFA films from the 1920s to 1940s ("Es wird einmal ein Wunder"). With the support from its artistic director Richard Wherrett, this led to the formation of the project Ringing the Bell Backwards at the Melbourne International Arts Festival and eventually to the Australian Art Orchestra in 1994. That year, Grabowsky wrote a piano concerto for Michael Kieran Harvey.

In 1991 his first child was born; Isabella Grabowsky. His son Guy Grabowksy was born in 1995.

In 1995, the Australian Art Orchestra toured Europe, and later India in 1996. Grabowsky directed the Victorian Arts Centre's Summer Music programme. Late that year he was commissioned to front the 14-part ABC TV series Access All Areas. As Commissioning Editor for ABC Television Arts and Entertainment (1996–1998), he commissioned the documentary series Long Way to the Top. During the late 1990s, Grabowsky concentrated on writing music for film and television: Molokai: The Story of Father Damien (1999) and Innocence (2000) by Paul Cox, Siam Sunset by John Polson, the NBC mini-series Noah's Ark, the UK production Shiner. Northern Rivers Performing Arts (NORPA) commissioned his first opera, The Mercenary with a (libretto by Janis Balodis).

In 2000, the project The Theft of Sita came to fruition; it combined jazz elements, Balinese gamelan music and puppetry. The piece premiered in Adelaide, and has since toured worldwide. In that year, Grabowsky was also involved in the ceremonies of the Sydney Olympics and the Paralympics. Since then, he has written the opera Love in the Age of Therapy (libretto by Joanna Murray-Smith) and the symphony Streets of Hurqalya (26 June 2002), commissioned by the Melbourne Symphony Orchestra. Among his recent film scores are Fred Schepisi's Last Orders and It Runs in the Family, Paul Cox's The Diaries of Vaslav Nijinsky, and Disney's The Jungle Book 2. From 2003 to 2007, Grabowsky was commissioner at the Australian Film Commission. In 2004 he became involved in Charles Darwin Universitys Remote Indigenous Music Program.[2]

In 2005, Grabowsky was appointed Artistic Director for the Queensland Music Festival 2007.[3] His song cycle Before Time Could Change Us, lyrics by Dorothy Porter and featuring Katie Noonan, was commissioned by the Queensland Music Festival and released in 2005 by the Warner Music Group. He recorded an album of original jazz compositions, Tales of Time and Space, with Branford Marsalis (soprano sax), Joe Lovano (tenor sax), Scott Tinkler (trumpet), Ed Schuller (bass) and Jeff "Tain" Watts (drums). In 2007 he was appointed inaugural patron of the National Film and Sound Archive's project Sounds of Australia.[4] On 4 January 2008, the Adelaide Festival of Arts appointed Grabowsky as its artistic director for the 2010 festival, its 50th anniversary year.[5]

This article uses material from the article Paul Grabowsky from the free encyclopedia Wikipedia and it is licensed under the GNU Free Documentation License.