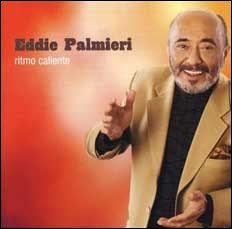 Palmieri's parents moved to New York from Ponce, Puerto Rico, in 1926, and settled in the South Bronx, a largely Hispanic neighborhood. There, he and his elder brother, Charlie Palmieri, were born. He accompanied Charlie and participated in many talent contests when he was eight years old.[1]

Palmieri continued his education in the city's public school system where he was constantly exposed to music, specifically jazz. He took piano lessons and performed at Carnegie Hall when he was 11 years old. His main influences were Thelonious Monk and McCoy Tyner. Inspired by his older brother, he was determined to someday form his own band – something he achieved in 1950, when he was fourteen years old. During the 1950s, Palmieri played in various bands, including Tito Rodríguez's.[1]

In 1961, Palmieri founded the band Conjunto La Perfecta, which featured singer Ismael Quintana. Apart from the big bands, at the beginning of the decade the Charanga was the Latin dance craze. Essential to the Charanga style is the five key wooden flute and at least two violins. Palmieri decided to replace the violins with two trombones for a heavier sound.[2]

Two key elements to the 'Palmieri' sound were trombonists Barry Rogers (who was very influential to the fourth chords sound that Palmieri is known for) and Brazilian-born José Rodrígues. Together they were responsible for many of the 'head' arrangements, mambos and moñas that the band recorded. George Castro (flute), Manny Oquendo (bongó and timbales), Tommy López (conga) and Dave Pérez (bass) rounded out the group. To this day, the group is known as one of the swingingest, most danceable, innovative and influential groups of that period.[2]

Palmieri experimented by including a touch of jazz in his recordings, and incorporating a popular Cuban rhythm known as mozambique. Lo Que Traigo Es Sabroso (What I Bring is Saucy) and Mozambique are just two examples of his use of this rhythm. Seeking a bigger and punchier sound, Palmieri disbanded the band in 1968.[1][3]

In 1971, Palmieri recorded Vamonos Pa'l Monte (Let's go to the Mountain) with his brother Charlie at the organ. That same year he also recorded Eddie Palmieri & Friends in Concert, At the University of Puerto Rico. In 1975, Palmieri became the first Latin musician to win a Grammy Award for Best Latin Recording with The Sun of Latin Music (produced by Harvey Averne and (arranged by René Hernández, long-time pianist with the orchestra led by Machito, and Barry Rogers (Un Día Bonito)). On July 21, 1979, he appeared at the Amandla Festival along with Bob Marley, Dick Gregory and Patti LaBelle, among others.[1][2][3]

In the 1980s, Ismael Quintana returned to the band, which also included Cheo Feliciano. Palmieri won two Grammys for the recordings of Palo Pa' Rumba and Solito. He also recorded the album La Verdad (The Truth) with salsa singer Tony Vega in 1987. Next year the happiness of his success was set back by the sudden death of his brother, Charlie.[1]

In the 1990s, Palmieri had participated in various concerts and recordings with the Fania All-Stars and the Tico All-Stars; he also introduced La India with the production of Llegó La India via Eddie Palmieri (La India has arrived via Eddie Palmieri), released in 1992. In 1998, Palmieri received an honorary doctorate from the Berklee College of Music.[4] In 2000, Palmieri announced his retirement from the world of music. However, he recorded Masterpiece with Tito Puente and won two Grammys; additionally he was also named the "Outstanding Producer of the Year" by the National Foundation of Popular Culture. Palmieri has won a total of 9 Grammy Awards in his career, most recently for his 2006 album Simpático. On November 6, 2004, Palmieri directed a "Big Band Tribute" to his late brother Charlie at Avery Hall at the Lincoln Center for the Performing Arts.[1][2][3]

Palmieri's La Perfecta departed from the traditional Caribbean sources of salsa instrumentation by introducing a new stylistic device into the New York Latin sound. Their signature sound relied heavily on two trombones and a flute instead of trumpets. On the liner notes of their first album, Eddie's brother Charlie dubbed this combination the 'trombanga', referring to the trombones and the still popular charanga which typically featured the flute. The combination helped to give La Perfecta a rich and bold sound which contributed to Palmieri's success with his new band. The trombone-based sound was later adopted by salsa band leaders Willie Colón and Manny Oquendo, among others.[1][3]

Back in the studio

Palmieri returned to the studio to record three songs for the soundtrack to Doin' it in the Park: Pickup Basketball NYC. The documentary, co-directed by Bobbito García and Kevin Couliau, explores the relationship between NYC playgrounds, basketball, arts and culture.

This article uses material from the article Eddie Palmieri from the free encyclopedia Wikipedia and it is licensed under the GNU Free Documentation License.