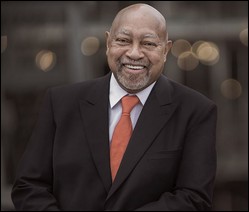 Kenny Barron (born June 9, 1943) is an American jazz pianist, who has appeared on hundreds of recordings as leader and sideman and is considered one of the most influential mainstream jazz pianists since the bebop era.[1][2][3]

Born in Philadelphia, Pennsylvania, Kenny Barron is the younger brother of tenor saxophonist Bill Barron (1927–1989). One of his first gigs was as pianist with the Dizzy Gillespie quartet. Barron was briefly a member of the Jazztet around 1962, but did not record with them.[4]

He graduated in 1978 with a BA in Arts from Empire State College (Metropolitan Center, New York City).

He also co-led the groups Sphere and the Classical Jazz Quartet.[1]

He has been nominated nine times for Grammy Awards and for the American Jazz Hall of Fame. He was elected a Fellow of the American Academy of Arts and Sciences in 2009.[5]

In May 2010, Barron was awarded an Honorary Doctorate of Music from Berklee College of Music along with African-born singer/songwriter Angelique Kidjo, Spanish guitarist Paco de Lucia, and songwriting duo Leon Huff and Kenneth Gamble.[6]

For over 25 years, Barron taught piano and keyboard harmony at Rutgers University in New Jersey. He now teaches at the Juilliard School of Music. His piano students have included Earl MacDonald,[7] Harry Pickens, and Aaron Parks.[8]

This article uses material from the article Kenny Barron from the free encyclopedia Wikipedia and it is licensed under the GNU Free Documentation License.