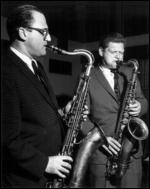 Al Cohn (November 24, 1925 – February 15, 1988)[1] was an American jazz saxophonist, arranger and composer. He came to prominence in the band of clarinetist Woody Herman and was known for his longtime musical partnership with fellow saxophonist Zoot Sims.

Alvin Gilbert Cohn was born in Brooklyn, New York.[1] He was initially known in the 1940s for playing in Woody Herman's Second Herd as one of the Four Brothers, along with Zoot Sims, Stan Getz, and Serge Chaloff. Unlike the better-known tenors Sims and Getz, Cohn contributed arrangements to the Herman band. Cohn had a reputation as a lyrical flowing soloist.

After leaving the Herman group Cohn went on to play with a variety of other musicians, but his best-known association was his long-term partnership with fellow Herman veteran tenor player Sims, beginning with the quintet they co-led in 1956. They continued to play together sporadically until the death of Sims. The high point of their recorded output can be found on You 'n' Me, a collection of standards and original compositions released on Mercury Records in 1960. The two also played on some of author Jack Kerouac's recordings. The rhythm section on their 1950s recordings included Mose Allison on piano.

In addition to his work as a jazz tenor saxophonist, Cohn was widely respected as an arranger. His work included the Broadway productions of Raisin' and Sophisticated Ladies, and his arrangements of his own compositions were recorded by big bands led by Maynard Ferguson, Gerry Mulligan, Terry Gibbs and Bob Brookmeyer. Also, Cohn did arrangements for unreleased Linda Ronstadt recordings from the 1980s.[2]

Cohn also appeared on stage with Elvis Presley in June, 1972, as a member of the Joe Malin Orchestra at Madison Square Garden.

Al Cohn died of liver cancer in Stroudsburg, Pennsylvania in 1988.[1]

Cohn's first wife was singer Marilyn Moore. His son, Joe Cohn, is a jazz guitar player. Granddaughter Shaye Cohn, Joe's daughter, is a musician who plays cornet with her band Tuba Skinny in New Orleans and at jazz festivals in Italy and Australia and elsewhere. Shaye also plays accordion, violin and piano. Al Cohn was also briefly married to singer Mary Ann McCall. Al Cohn was married to Flo Handy, a singer and composer, from the mid-60’s until his death.

This article uses material from the article Al Cohn from the free encyclopedia Wikipedia and it is licensed under the GNU Free Documentation License.

The Blues Is Dead Jontavious Willis
Update Required To play the media you will need to either update your browser to a recent version or update your Flash plugin.