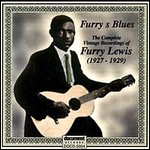 Walter E. "Furry" Lewis (March 6, 1893[1] or 1899[2] – September 14, 1981) was an American country blues guitarist and songwriter from Memphis, Tennessee. He was one of the first of the blues musicians active in the 1920s to be brought out of retirement and given new opportunities to record during the folk blues revival of the 1960s.

Lewis was born in Greenwood, Mississippi. His birth year is uncertain. Many sources give 1893, the date he gave in his later years, but the researchers Bob Eagle and Eric LeBlanc suggest 1899, based on his 1900 census entry, and other sources suggest 1895 or 1898.[2] His family moved to Memphis when he was seven.[1] He acquired the nickname "Furry" from childhood playmates.[3] By 1908, he was playing solo at parties, in taverns, and on the street. He was also invited to play several dates with W. C. Handy's Orchestra.[3]

In his travels as a musician, he was exposed to a wide variety of performers, including Bessie Smith, Blind Lemon Jefferson, and Alger "Texas" Alexander. Like his contemporary Frank Stokes, he grew tired of traveling and took a permanent job in 1922. His position as a street sweeper for the city of Memphis, a job he held until his retirement in 1966, allowed him to continue performing music in Memphis.[3]

Lewis made his first recordings for Vocalion Records in Chicago in 1927.[4] A year later he recorded for Victor Records at the Memphis Auditorium, in a session with the Memphis Jug Band, Jim Jackson, Frank Stokes, and others. He again recorded for Vocalion in Memphis in 1929.[3] The tracks were mostly blues but included two-part versions of "Casey Jones" and "John Henry". He sometimes fingerpicked and sometimes played with a slide.[5] He made many successful records in the late 1920s, including "Kassie Jones", "Billy Lyons & Stack-O-Lee" and "Judge Harsh Blues" (later called "Good Morning Judge").

In 1969, the record producer Terry Manning recorded Lewis in his Fourth Street apartment in Memphis, near Beale Street. These recordings were released in Europe at the time by Barclay Records and again in the early 1990s by Lucky Seven Records in the United States and in 2006 by Universal Records. Joni Mitchell's song "Furry Sings the Blues" (on her album Hejira), is about her visit to Lewis's apartment and a mostly ruined Beale Street on February 5, 1976. Lewis despised the Mitchell song and felt she should pay him royalties for being its subject.[6]

He opened twice for the Rolling Stones, performed on The Tonight Show Starring Johnny Carson, had a part in a Burt Reynolds movie (W.W. and the Dixie Dancekings, 1975), and was profiled in Playboy magazine.[1][5]

Lewis began to lose his eyesight because of cataracts in his final years. He contracted pneumonia in 1981, which led to his death from heart failure in Memphis on September 14 of that year, at the age of 88.[7] He is buried in the Hollywood Cemetery, in South Memphis, where his grave bears two headstones, the second purchased by fans.[6]

This article uses material from the article Furry Lewis from the free encyclopedia Wikipedia and it is licensed under the GNU Free Documentation License.

For Mods Only Chico Hamilton
Update Required To play the media you will need to either update your browser to a recent version or update your Flash plugin.