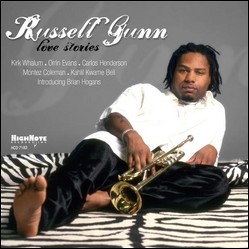 He grew up in East St. Louis, Illinois playing trumpet, and his initial musical interest was hip hop with LL Cool J being his first music idol. His current projects include a large ensemble called Bionic, which released a record called Krunk Jazz and his smaller group Electrik Butterfly.[3]

In 2007, Gunn released an album Russell Gunn Plays Miles, that featured some of the greatest songs of Miles Davis.[4]

As sideman and co-leader

This article uses material from the article Russell Gunn from the free encyclopedia Wikipedia and it is licensed under the GNU Free Documentation License.

Belleville rendez-vous (version française) Sugar And The Josephines
Update Required To play the media you will need to either update your browser to a recent version or update your Flash plugin.