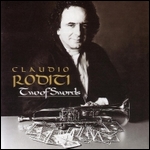 Cláudio Roditi (born May 28, 1946 in Rio de Janeiro, Brazil) is a Brazilian jazz trumpeter resident in the United States.[1][2]

After arriving in the United States in 1970, he began to study at Berklee School of Music, where he became musically influenced by Clifford Brown and Lee Morgan. In 1976 he moved to New York and began to establish himself as a formidable jazz figure.

Currently he leads his own band and frequently travels as a member of Dizzy Gillespie's United Nations Orchestra.

He earned a Grammy Award nomination in 1995 for his "Symphonic Bossa Nova",[3] and another in 2010 as Best Latin Jazz Album for Brazilliance X 4.[4]

This article uses material from the article Claudio Roditi from the free encyclopedia Wikipedia and it is licensed under the GNU Free Documentation License.