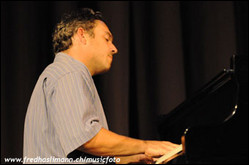 Calderazzo began studying classical piano at age eight. His brother, Gene, got him interested in jazz. He studied with Richard Beirach and in the 1980s continued his studies at Berklee College of Music and the Manhattan School of Music. At the same time, he was playing professionally with David Liebman and Frank Foster.[1]

At a music clinic he met saxophonist Michael Brecker and became part of his quintet beginning in 1987.[2] In 1990, he signed with Blue Note Records.[1] Brecker produced Calderazzo's first album, In the Door, which featured Jerry Bergonzi and Branford Marsalis, his brother's roommate in Boston. They played on his second album, To Know One, which included Dave Holland and Jack DeJohnette.[3]

Calderazzo appeared on Brecker's albums Tales from the Hudson and Two Blocks from the Edge as pianist and composer. He played keyboard in Marsalis's Buckshot LeFonque and contributed to his album Music Evolution. When pianist Kenny Kirkland died in 1998, Calderazzo assumed his place in the Branford Marsalis Quartet.[2] In 1999 he recorded Joey Calderazzo with John Patitucci and Jeff 'Tain' Watts.[4] He played on Marsalis's albums Contemporary Jazz, Footsteps of Our Fathers, Romare Bearden Revealed, Eternal and on the DVD Coltrane's 'A Love Supreme' Live in Amsterdam. Calderazzo's composition "Hope" appears on Braggtown.

He was one of the first musicians to sign with Marsalis Music, owned by Branford Marsalis. Haiku, his first solo album, appeared in 2002. His album Amanacer featured singer Claudia Acuña and guitarist Romero Lubambo. In 2011, he and Marsalis formed a duo and recorded Songs of Mirth and Melancholy.

This article uses material from the article Joey Calderazzo from the free encyclopedia Wikipedia and it is licensed under the GNU Free Documentation License.

Misty Claude Tissendier
Update Required To play the media you will need to either update your browser to a recent version or update your Flash plugin.