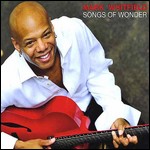 Whitfield was born in Lindenhurst, New York. He is probably better known for his recordings as bandleader for both the Verve and Warner Bros. Records record labels. He has worked with Jack McDuff, Jimmy Smith, Courtney Pine and Nicholas Payton, Chris Botti, among others.[1]

This article uses material from the article Mark Whitfield from the free encyclopedia Wikipedia and it is licensed under the GNU Free Documentation License.

Estate Royce Campbell
Update Required To play the media you will need to either update your browser to a recent version or update your Flash plugin.