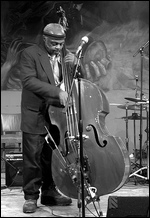 After more than a decade of activity and performance, notably as a leading bassist in free jazz, Grimes completely disappeared from the music scene by 1970.[1] Grimes was often presumed dead, but he was rediscovered in 2002 and returned to performing.[1]

As a child, Grimes took up the violin, then began playing tuba, English horn, percussion, and finally the double bass at age 13 or 14, while he was in high school. Grimes furthered his musical studies at Juilliard, and established a reputation as a versatile bassist in the mid-1950s. He recorded or performed with saxophonists Gerry Mulligan and Sonny Rollins, pianist Thelonious Monk, singer Anita O'Day, clarinetist Benny Goodman and many others.[1] At a time when bassist Charles Mingus was experimenting with a second bass player in his band, Grimes was the person he selected for the job.[1] One of his earliest appearances on film is captured in the Bert Stern documentary on the Newport Jazz Festival, Jazz on a Summer's Day.

Gradually growing interested in free jazz, Grimes performed with most of the music's important names, including pianist Cecil Taylor, trumpeter Don Cherry, saxophonists Steve Lacy, Pharoah Sanders, Archie Shepp, and Albert Ayler. He released one album, The Call as a trio leader for the ESP-Disk record label in 1965. The album features Perry Robinson on clarinet and Tom Price on drums and is considered to be of a great quality representative of his career.

In the late 1960s, Grimes career came to a halt after his move to California. It was commonly assumed Grimes had died; he was listed as such in several jazz reference works. Then Marshall Marrotte, a social worker and jazz fan, set out to discover Grimes's fate once and for all. In 2003, he found Grimes alive but nearly destitute, without a bass to play, renting a tiny apartment in Los Angeles, California, writing poetry and doing odd jobs to support himself. He had fallen out of touch with the jazz world and was unaware Albert Ayler had died, but was eager to perform again.[2]

Word spread of Grimes's 'resurrection', and some musicians and fans offered their help. Bassist William Parker donated a bass (nicknamed "Olive Oil", for its distinctive greenish color) and with David Gage's help had it shipped from New York to Los Angeles, and others assisted with travel expenses and arranging performances. Grimes's return was featured in The New York Times and on National Public Radio. A documentary film is planned, as is a biography.

Grimes has made up for lost time: In 2003 he performed at over two dozen music festivals or other appearances. Grimes received a returning hero's welcome at the free jazz-oriented Vision Festival, and is teaching lessons and workshops for bassists. His November 2003 appearance on trumpeter Dennis González' Nile River Suite was the bassist's first recording in more than 35 years.[3] In 2004 he recorded as leader with David Murray and Hamid Drake; and in 2005 with guitarist Marc Ribot, who also wrote an introduction to Grimes' first book, Signs Along the Road, published in March 2007 by buddy's knife jazzedition in Cologne, Germany, a collection of Grimes' poetry, in which he presents his selection of entries from thousands of pages of his writings. Also in 2007, Henry Grimes recorded with drummer Rashied Ali, with whom he has played a half-dozen duo concerts and a trio with Marilyn Crispell, and in 2008 with Paul Dunmall and Andrew Cyrille, a co-leader trio called the Profound Sound Trio, among others.

Since his return in 2003, at many venues around New York and on tour in the U.S., Canada, and 27 countries in Europe and the Far East, often working as a leader, Henry Grimes has been making music with Rashied Ali, Marshall Allen, Fred Anderson, Marilyn Crispell, Ted Curson, Andrew Cyrille, Bill Dixon, Dave Douglas, Andrew Lamb, Joe Lovano, Roscoe Mitchell, William Parker, Wadada Leo Smith, Cecil Taylor (with whom Henry resumed playing in October, 2006 after forty years), John Tchicai, and many others. In the past few years, Henry has also held a number of residencies and offered workshops and master classes on major campuses (including Berklee College of Music, Hamilton College, New England Conservatory, the University of Michigan at Ann Arbor, the University of Gloucestershire at Cheltenham, Humber College, and several more). He has released or played on a dozen new recordings, made his professional debut on a second instrument (the violin) at Lincoln Center at the age of 70, and has been creating illustrations to accompany his new recordings and publications. He has received many honors in recent years, including four Meet the Composer grants and a grant from the Acadia Foundation. He can be heard on more than 80 recordings on various labels, including Atlantic, Ayler Records, Blue Note, Columbia, ESP-Disk, ILK Music, Impulse!, JazzNewYork Productions, Pi Recordings, Porter Records, Prestige, Riverside, and Verve. Henry Grimes is now a resident of New York City and has a busy schedule of performances, clinics, and international tours.

In 2011, the Chelsea Art Museum hosted a re-creation of the performance Black Zero, a happening created in the 1960's by pioneering media artist Aldo Tambellini. Tambellini performed the multi-media piece together with Group Center on several occasions between 1965 and 1968, often in collaboration with Jazz musicians such as Bill Dixon and Cecil McBee. The performance at the Chelsea Art Museum was produced by Swiss conceptual artist Christoph Draeger, who invited Henry Grimes to join. Henry Grimes played with Ben Morea, accompanying simultaneous slide- and film projections by Aldo Tambellini, and sound recordings of the late Calvin Hernton's radical poetry.[4]

with David Murray and Hamid Drake

This article uses material from the article Henry Grimes from the free encyclopedia Wikipedia and it is licensed under the GNU Free Documentation License.

Imitation Of Love Johnny Adams
Update Required To play the media you will need to either update your browser to a recent version or update your Flash plugin.