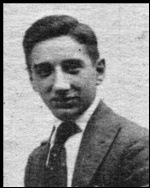 Frank Signorelli (May 24, 1901 December 9, 1975) was an US jazz pianist of the 1920s. He was a founder member of the Original Memphis Five in 1917, then joined the Original Dixieland Jazz Band briefly in 1921. In 1927 he played in Adrian Rollini's New York ensemble, and subsequently worked with Eddie Lang, Bix Beiderbecke, Matty Malneck and Paul Whiteman. In 1936-38 he played in the revived version of the Original Dixieland Jazz Band. He recorded with Phil Napoleon in 1946 and with Miff Mole in 1958.

This article uses material from the article Frank Signorelli from the free encyclopedia Wikipedia and it is licensed under the GNU Free Documentation License.

I Found A New Home Claude Diallo Situation
Update Required To play the media you will need to either update your browser to a recent version or update your Flash plugin.