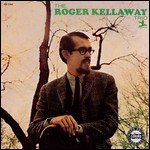 Born in Waban, Massachusetts, he is an alumnus of the New England Conservatory. Kellaway has composed commissioned works for orchestra, chamber ensemble, and jazz big band, as well as for film, TV, ballet and stage productions. One of his early mentors, the late Phil Saltman, was his piano teacher and ran a summer music camp called ENCORE in Marblehead, Massachusetts.

In 1970 Kellaway formed the Roger Kellaway Cello Quartet with cellist Edgar Lustgarden, bassist Chuck Domanico and percussionist Emil Richards. The group's piece "Come to the Meadow" was used as the theme for the NPR program Selected Shorts. For a 1978 album Nostalgia Suite, the group became a quintet with drummer Joe Porcaro added.

On November 7 and 8, 2008 Kellaway served as band leader and pianist during the Astral Weeks Live at the Hollywood Bowl concerts by Van Morrison, celebrating the fortieth anniversary of the acclaimed album that was released in November 1968. Featured also is guitarist Jay Berliner, who played on the album.

Kellaway received an Oscar nomination for Best Adaptation Score for the film A Star Is Born (1976), and a Grammy Award for Best Instrumental Arrangement for the Eddie Daniels album Memos from Paradise (1988). Guitarist Robben Ford credits Kellaway and Tom Scott as a major influence on his musical development, whom he met while playing for Joni Mitchell.[2] Kellaway was featured on Ilya Serov's original rendition of Django Reinhardt's song "Swing 42" in 2017. [1]

With The Russian Jazz Quartet

This article uses material from the article Roger Kellaway from the free encyclopedia Wikipedia and it is licensed under the GNU Free Documentation License.

Endless Sonja Huber Quartet
Update Required To play the media you will need to either update your browser to a recent version or update your Flash plugin.