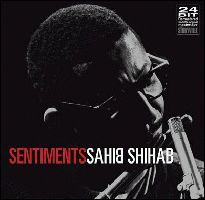 Edmund Gregory first played alto saxophone professionally for Luther Henderson at age 13[2] and went on to study at the Boston Conservatory and to play with trumpeter Roy Eldridge. He played lead alto with Fletcher Henderson in the mid 1940s.

He was one of the first jazz musicians to convert to Islam and changed his name in 1947. During the late 1940s, Shihab played with Thelonious Monk and on July 23, 1951 he recorded with Monk for the Lp Genius of Modern Music: Volume 2. During this period, he also appeared on recordings by Art Blakey, Kenny Dorham and Benny Golson. The invitation to play with Dizzy Gillespie's big band in the early 1950s was of particular significance as it marked Shihab's switch to baritone.

On August 12, 1958, Shihab was one of the musicians photographed by Art Kane in his famous photograph known as "A Great Day in Harlem". In 1959, he toured Europe with Quincy Jones after getting disillusioned with racial politics in United States and ultimately settled in Scandinavia. He worked for Copenhagen Polytechnic and wrote scores for television, cinema and theatre.

In 1961, he joined the Kenny Clarke/Francy Boland Big Band and remained a member of the band for the 12 years it existed. He married a Danish woman and raised a family in Europe, although he remained a conscious African-American still sensitive to racial issues.

In the Eurovision Song Contest 1966, Shihab accompanied Lill Lindfors and Svante Thuresson on stage for the Swedish entry "Nygammal Vals".

In 1973, Shihab returned to the United States for a three-year hiatus, working as a session man for rock and pop artists and also doing some copy writing for local musicians. He spent his remaining years between New York and Europe and played in a partnership with Art Farmer.[3]

With Curtis Fuller and Hampton Hawes

With Julius Watkins and Charlie Rouse

This article uses material from the article Sahib Shihab from the free encyclopedia Wikipedia and it is licensed under the GNU Free Documentation License.