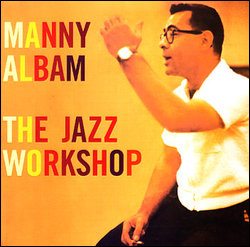 The son of Lithuanian immigrants, who was born in the Dominican Republic when his mother went into labour en route to the United States, Albam grew up in New York City.[3] He became interested in jazz on hearing Bix Beiderbecke and at sixteen dropped out of school to play for Dixieland trumpeter-leader Muggsy Spanier, but it was his membership in a group led by Georgie Auld that turned Albam's career around.

Albam's early career as an arranger

The Auld group included saxophonist Budd Johnson, then a primary arranger for the group, and Johnson mentored Albam as an arranger. By 1950, Albam had put down his baritone sax and began to concentrate strictly on arranging, writing, and leading. Within a few years, he became known for a bebop-oriented style that emphasised taut and witty writing with a flair for distinctive shadings(Flute-led reed sections became something of an Albam trademark). One of his most popular works from that era was an Afro-Latin composition he did for the Stan Kenton Innovations Orchestra entitled Samana, named after his birthplace in the Dominican Republic.[4]

He became known for his work for bandleaders Charlie Barnet and Charlie Spivak, before moving forward to collaborate with jazzmen as varied as Count Basie, Stan Getz, Bob Brookmeyer (who frequently appeared on Albam's own albums as a leader), Coleman Hawkins (particularly the tenor saxophone pioneer's late-life but spry recording of "I Love Paris"), Dizzy Gillespie, Freddie Hubbard, Hank Jones, Mel Lewis, Art Farmer, Urbie Green, and Milt Hinton, among others, on their recordings and on his own recordings as a leader for several labels.

West Side Story and working for RCA-Solid State Records

Albam also found an entree into the classical music world when he arranged Leonard Bernstein's score for West Side Story in 1957. The work earned Albam a Grammy Nomination in 1959. Bernstein was said to have been so impressed that he invited Albam to write for the New York Philharmonic itself, an invitation, according to allmusic.com, that led Albam to study classical music for a time and, in due course, write such works as Concerto for Trombone and Strings.

By 1964, Albam became musical director for United Artists-Solid State Records; his jazz suite The Soul of the City was released on that label two years later. Following that, Albam turned increasingly to teaching, a pursuit he continued until his death of cancer in 2001.[5]

He also did the score for a few films and television programs; a song of his was included in Waking the Dead.[6]

Among the Albam recordings that remain available for listeners today are The Blues is Everybody's Business, The Drum Suite, The Jazz Workshop, Jazz New York, and Something New, Something Blue.

With the encouragement of close friend Rayburn Wright, Albam started teaching summer workshops at the Eastman School of Music in Rochester, New York in 1964. He later joined the faculties of Glassboro State College in New Jersey and the Manhattan School of Music in New York. In 1988, he helped establish the BMI Jazz Composer's Workshop to foster young composers and arrangers. In 1991 he eventually took over as director from Bob Brookmeyer. He has as long list of former students throughout the music industry and in higher education.

This article uses material from the article Manny Albam from the free encyclopedia Wikipedia and it is licensed under the GNU Free Documentation License.

Red Shirt Girl Raphael Jost
Update Required To play the media you will need to either update your browser to a recent version or update your Flash plugin.