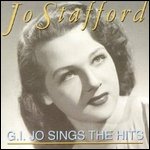 Jo Elizabeth Stafford (November 12, 1917 – July 16, 2008[1]) was an American singer of traditional pop music and jazz standards whose career ran from the late 1930s to the early 1960s. Stafford was greatly admired for the purity of her voice and was considered one of the most versatile vocalists of the era.Cite error 3; Invalid <ref> tag; invalid names, e.g. too many She was also viewed as a pioneer of modern musical parody, having won a Grammy Award for Best Comedy Album in 1961 (with husband Paul Weston) for their album Jonathan and Darlene Edwards in Paris. She was also the first woman to have a No 1 on the UK Singles Chart.[3]

Stafford was born in Coalinga, California, to Grover Cleveland Stafford and Anna York Stafford, a distant cousin of World War I hero Sergeant Alvin York. Originally, she wanted to become an opera singer and studied voice as a child. However, because of the economic Great Depression, she abandoned that idea and joined her sisters Christine and Pauline in a popular vocal group, "The Stafford Sisters", which performed on Los Angeles radio station KHJ.

In 1937 she worked behind the scenes with Fred Astaire on the soundtrack of A Damsel in Distress and created the arrangement and, with her sisters, the backing vocals for "Nice Work If You Can Get It". She claimed that her arrangement had to be adapted as Astaire had difficulty with some of the syncopation, in her words: "The man with the syncopated shoes couldn't do the syncopated notes".[2]

When her sisters married, the group broke up and Stafford joined a new vocal group, The Pied Pipers. This group consisted of eight members besides Stafford: John Huddleston (who was Stafford's husband from 1941 to 1943, when they divorced), Hal Hooper, Chuck Lowry, Bud Hervey, George Tait, Woody Newbury, and Dick Whittinghill. The group became very popular, working on local radio and movie soundtracks, and caught the attention of two of Tommy Dorsey's arrangers, Axel Stordahl and Paul Weston.

In 1938, Weston persuaded Dorsey to sign The Pied Pipers for his radio show, and they went to New York for a broadcast date. Dorsey liked them enough to sign them for ten weeks, but after the second broadcast the sponsor heard them and disliked them, firing the group. They stayed in New York for three months, but landed only a single job that paid them just $3.60 each, though they did record four sides for RCA Victor Records.

Half the members of the Pied Pipers returned to Los Angeles, but they had a difficult time trying to make a living until they got an offer from Dorsey to join his big band in 1939. This led to success for the whole group, but especially for Stafford, who was also featured in solo performances. The group also backed Frank Sinatra in some of his early recordings.

In 1942, the group had an argument with Dorsey and left, but in 1943 it became one of the first groups signed to Johnny Mercer's new label, Capitol Records. Capitol's music director was the same Paul Weston who had been instrumental in introducing Stafford to Dorsey. Weston and Stafford married in 1952. They went on to have two children, Tim and Amy.

In 1944, Stafford left the Pied Pipers to go solo. Her tenure with the USO, in which she gave countless performances for soldiers stationed overseas, acquired her the nickname "G.I. Jo."

Beginning in 1944, she hosted the Tuesday and Thursday broadcasts of an NBC musical variety radio program — The Chesterfield Supper Club.

In 1948 Stafford and Gordon MacRae had a million-seller with their version of "Say Something Sweet to Your Sweetheart" and in 1949 repeated their success with "My Happiness".

In 1950, she left Capitol for Columbia Records, later returning to Capitol in 1961. While at Columbia she was the first recording artist to sell 25 million records. During her second stint at Capitol, Stafford also recorded for Frank Sinatra's Reprise label. These albums were released between 1961 and 1964, and were mostly retrospective in nature. Stafford left the label when Sinatra sold it to Warner Brothers.

In the 1950s, she had a string of popular hits with Frankie Laine, six of which charted; their duet of Hank Williams' "Hey Good Lookin'" making the top ten in 1951. It was also at this time that Stafford scored her best known hits with huge records like "Jambalaya," "Shrimp Boats," "Make Love to Me," and "You Belong to Me". The last song was Stafford's all-time biggest hit, topping the charts in both the United States and the United Kingdom (the first song by a female singer to top the UK chart).

Stafford hosted the 15-minute The Jo Stafford Show on CBS-TV from 1954 to 1955 with Weston as her conductor and music arranger.

Stafford briefly experimented with comedy under the name "Cinderella G. Stump" with Red Ingle and the Natural Seven. She recorded a mock hillbilly version of Temptation, which she pronounced "Tim-tayshun."[4] True success in the comedy genre, though, would come about almost accidentally.

Throughout the 1950s, Stafford and Paul Weston would entertain guests at parties by putting on a skit in which they assumed the identities Jonathan and Darlene Edwards, a bad lounge act. Stafford, as Darlene, would sing off-key in a high pitched voice; Weston, as Jonathan, played an untuned piano off key and with bizarre rhythms.

Finding that she had time left over following a 1957 recording session, Stafford, as a gag, recorded a track as Darlene Edwards. Those who heard bootlegs of the recording responded positively, and later that year, Stafford and Weston recorded an entire album of songs as Jonathan and Darlene, entitled Jo Stafford and Paul Weston Present: The Original Piano Artistry of Jonathan Edwards, Vocals by Darlene Edwards. As a publicity stunt, Stafford and Weston claimed that the Edwardses were a New Jersey lounge act that they had discovered, and denied any personal connection. The ruse triggered a national sensation as the public tried to identify the brazenly off-key singer and the piano player of dubious ability. (Some guessed Margaret and Harry Truman, Time magazine noted.)[4] Much time would pass before people realized (and Stafford and Weston admitted) that they were in fact the Edwardses. The album was followed up with a "pop standards" album, on which the pair intentionally butchered popular music. The album was a commercial and critical success; it proved to be the first commercially successful musical parody album, laying the groundwork for the careers of later "full time" musical parodists such as "Weird Al" Yankovic.

The couple continued releasing Jonathan and Darlene albums, with their 1961 album, Jonathan and Darlene Edwards in Paris winning that year's Grammy Award for Best Comedy Album (they "tied" with Bob Newhart, as the Grammys decided, in a rare move, to issue two comedy awards that year. Newhart was given an award for "Spoken Word Comedy.") It was the only major award that Stafford ever won.

The couple continued to release Jonathan and Darlene albums for several years, and in 1977 released a final single, a cover of The Bee Gees' "Stayin' Alive" backed with "I Am Woman." The same year also saw a brief resurgence in the popularity of Jonathan and Darlene albums when their cover of "Carioca" was featured as the opening and closing theme to The Kentucky Fried Movie.

In 1966, Stafford went into semi-retirement, retiring completely from the music business in 1975. Except for the 1977 Jonathan and Darlene Edwards version of "Stayin' Alive," Stafford wouldn't perform again until 1990, at a ceremony honoring Frank Sinatra.

Stafford won a breach-of-contract lawsuit against her former record label in the early 1990s, which won her the rights to all of her old recordings, including the Jonathan and Darlene recordings. Following the lawsuit, Stafford, along with son Tim, reactivated the Corinthian Records label which began life as a religious label the deeply religious Paul Weston had started. With Paul Weston's help, she compiled a pair of Best of Jonathan and Darlene albums, which were released in 1993.

In 1996, Paul Weston died of natural causes. Stafford continued to operate Corinthian Records. In 2006, she donated her library and her husband's to the University of Arizona.

Jo Stafford died in Century City, California of congestive heart failure on July 16, 2008 at the age of 90.[1]

This article uses material from the article Jo Stafford from the free encyclopedia Wikipedia and it is licensed under the GNU Free Documentation License.

Do You Know What It Means To Miss New Orleans DRS Big Band
Update Required To play the media you will need to either update your browser to a recent version or update your Flash plugin.