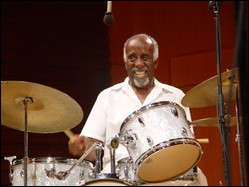 Eddie Locke was a part of the fertile and vibrant Detroit jazz scene during the 1940s and 1950s, which brought forth many great musicians including the Jones brothers (Hank, Thad, and Elvin), Kenny Burrell, Lucky Thompson, Tommy Flanagan, Barry Harris, and so many others. He eventually formed a variety act with drummer Oliver Jackson called Bop & Locke which played the Apollo Theater. He moved to New York City in 1954, and worked there with Dick Wellstood, Tony Parenti, Red Allen, Willie "The Lion" Smith, and Teddy Wilson amongst others. During this time he came under the tutelage of the great Jo Jones, and eventually became known as a driving and swinging drummer who kept solid time and supported the soloist. During the late 1950s he formed two of his most fruitful musical relationships, one with Roy Eldridge, and the other with Coleman Hawkins. His recording debut came with Eldridge in 1959 on "On The Town". He later became a member of the Coleman Hawkins Quartet in the 1960s along with pianist Tommy Flanagan and bassist Major Holley. That group made many fine records including the exquisite album "Today and Now", in 1963. Throughout the 1970s, he played with Roy Eldridge at Jimmy Ryan's in Manhattan, and wound out his career freelancing, as well as teaching youngsters at the Trevor Day School on Manhattan's upper west side.

Locke appears in the photograph A Great Day in Harlem- first row standing, third from the left. (not including the leg sticking into the frame)

This article uses material from the article Eddie Locke from the free encyclopedia Wikipedia and it is licensed under the GNU Free Documentation License.

The Nearness Of You Thomas Moeckel's Centrio
Update Required To play the media you will need to either update your browser to a recent version or update your Flash plugin.