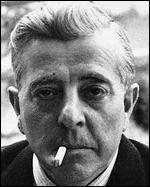 Jacques Prévert (French: [ʒak pʁevɛʁ]; 4 February 1900 – 11 April 1977) was a French poet and screenwriter. His poems became and remain popular in the French-speaking world, particularly in schools. His best-regarded films formed part of the poetic realist movement, and include Les Enfants du Paradis (1945).

Prévert was born at Neuilly-sur-Seine and grew up in Paris. After receiving his Certificat d'études upon completing his primary education, he quit school and went to work in Le Bon Marché, a major department store in Paris. In 1918, he was called up for military service in the First World War. After this, he was sent to the Near East to defend French interests there.

He died in Omonville-la-Petite, on 11 April 1977. He had been working on the last scene of the animated movie Le Roi et l'oiseau (The King and the Mockingbird) with his friend and collaborator Paul Grimault. When the film was released in 1980, it was dedicated to Prévert's memory, and on opening night, Grimault kept the seat next to him empty.

When Prévert was attending primary school, he at first hated writing. Later, he participated actively in the Surrealist movement.[1] Together with the writer Raymond Queneau and Marcel Duhamel, he was a member of the Rue du Château group.[2] He was also a member of the agitprop theater company Groupe Octobre where he helped craft a left-wing cinema in support of the causes of the Popular Front.[3][4] Prévert remained supportive of left-wing causes throughout his life. In 1971, he wrote a poem in support of the communist Angela Davis after her arrest.[5]

Prévert's poems were collected and published in his books: Paroles (Words) (1946), Spectacle (1951), La Pluie et le beau temps (Rain and Good Weather) (1955), Histoires (Stories) (1963), Fatras (1971) and Choses et autres (Things and Others) (1973). His poems are often about life in Paris and life after the Second World War. They are widely taught in schools in France, and frequently appear in French language textbooks published worldwide. Some, such as "Déjeuner du Matin", are also often taught in American upper-level French classes, for the students to learn basics.

Some of Prévert's poems, such as "Les Feuilles mortes" ("Autumn Leaves"), "La grasse matinée" ("Sleeping in"), "Les bruits de la nuit" ("The sounds of the night") and "Chasse à l'enfant" ("The hunt for the child") were set to music by Joseph Kosma—and in some cases by Germaine Tailleferre of Les Six, Christiane Verger, and Hanns Eisler. They have been sung by prominent French vocalists, including Marianne Oswald, Yves Montand, and Édith Piaf, as well as by the later American singers Joan Baez and Nat King Cole. In 1961, French singer-songwriter Serge Gainsbourg paid tribute to "Les feuilles mortes" in his own song "La chanson de Prévert".[6]

Prévert's poems are translated into many languages worldwide. Many translators have translated his poems into English. In Nepali, poet and translator Suman Pokhrel has translated some of his poems.

Prévert wrote a number of screenplays for the film director Marcel Carné. Among them were the scripts for Drôle de drame (Bizarre, Bizarre, 1937), Quai des brumes (Port of Shadows, 1938), Le Jour se lève (Daybreak, 1939), Les Visiteurs du soir (The Night Visitors, 1942) and Children of Paradise (Les Enfants du Paradis, 1945). The last of these regularly gains a high placing in lists of best films ever and earned him a oscar nomination for best original screenplay.[1][7]

His poems were the basis for a film by the director and documentarian Joris Ivens, The Seine Meets Paris (La Seine a rencontré Paris, 1957), about the River Seine. The poem was read as narration during the film by singer Serge Reggiani.[8] In 2007, a filmed adaptation of Prévert's poem, "To Paint the Portrait of a Bird," was directed by Seamus McNally, featuring T.D. White and Antoine Ray- English translation by Lawrence Ferlinghetti.

Prévert had a long working relationship with Paul Grimault, also a member of Groupe Octobre. Together they wrote the screenplays of a number of animated movies, starting with the short "The Little Soldier" ("Le Petit Soldat", 1947). They worked together until his death in 1977, when he was finishing The King and the Mocking Bird (Le Roi et l'Oiseau), a second version of which was released in 1980. Prévert adapted several Hans Christian Andersen tales into animated or mixed live-action/animated movies, often in versions loosely connected to the original. Two of these were with Grimault, including The King and the Mocking Bird, while another was with his brother Pierre Prévert (fr).

These include compilations of his poetry but also collaborations with Marc Chagall and Humanist photographers on patriotic and poignant albums of imagery of post-war Paris.

Prévert wrote the scenarios and sometimes the dialogue in the following films:

This article uses material from the article Jacques Prévert from the free encyclopedia Wikipedia and it is licensed under the GNU Free Documentation License.

Social Call Winard Harper
Update Required To play the media you will need to either update your browser to a recent version or update your Flash plugin.