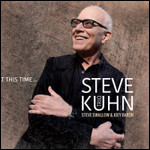 Kuhn was born on March 24, 1938, in Brooklyn, New York City. He began studying piano at the age of five and studied under Boston piano teacher Margaret Chaloff, mother of jazz baritone saxophonist Serge Chaloff, who taught him the "Russian style" of piano playing. At an early age he began improvising classical music. As a teenager he appeared in jazz clubs in the Boston area with Coleman Hawkins, Vic Dickenson, Chet Baker, and Serge Chaloff.

After graduating from Harvard, he attended the Lenox School of Music where he was associated with Ornette Coleman, Don Cherry, and Gary McFarland[1]. The school's faculty included Bill Evans, George Russell, Gunther Schuller, and the members of the Modern Jazz Quartet. This allowed Kuhn to play, study, and create with some of the most forward-thinking innovators of jazz improvisation and composition; it culminated with his joining trumpeter Kenny Dorham's group for an extended time and (briefly) John Coltrane's quartet at New York's Jazz Gallery club.

Kuhn also has appeared with Stan Getz, Art Farmer, Oliver Nelson, Gary McFarland, Ron Carter, Scott LaFaro, Harvie Swartz, vocalist Shelia Jordan, Billy Drummond, David Finck, and Miroslav Vitous. From 1967 to 1971 Kuhn moved to Stockholm, Sweden where he worked with his own trio throughout Europe. In 1971 Kuhn moved back to New York City and formed a quartet but continued doing European gigs and appearing at the Newport Jazz Festival.

In his early years, Kuhn was known as an avant-garde jazz pianist. He was associated with bassist Steve Swallow and drummer Pete La Roca during the 1960s on several notable recordings: Three Waves, under Kuhn's leadership; Basra, under La Roca's leadership, which also featured Joe Henderson; and Sing Me Softly of the Blues under flugelhornist Art Farmer's leadership. Also notable was Kuhn's inclusion in the quartet on the landmark recording Sound Pieces led by saxophonist, composer, and arranger Oliver Nelson and including Ron Carter on bass and Grady Tate on drums. Among other critically acclaimed recordings there was The October Suite composed by Gary McFarland for Kuhn and an ensemble which included strings, woodwinds, and reeds. The Promises Kept album features Kuhn's compositions, piano, and strings.

For decades, Steve Kuhn has led all-star trios that have included such players as bassists Ron Carter and David Finck, and drummers Al Foster, Jack DeJohnette, and Joey Baron. He has had several live recordings made in some of New York's leading jazz clubs. Kuhn is also the composer of the jazz standard "The Saga of Harrison Crabfeathers".

This article uses material from the article Steve Kuhn from the free encyclopedia Wikipedia and it is licensed under the GNU Free Documentation License.

Exactly Like You Diana Krall
Update Required To play the media you will need to either update your browser to a recent version or update your Flash plugin.