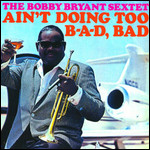 Bryant was born in Hattiesburg, Mississippi, and played saxophone in his youth. He moved to Chicago in 1952, where he studied at the Cosmopolitan School of Music until 1957. Remaining in the city until 1960, he played with Red Saunders, Billy Williams, and other ensembles. He relocated to New York City in 1960 and then Los Angeles in 1961, where he became a fixture on the West Coast jazz scene. He led his own groups in addition to playing with Vic Damone, Charles Mingus, Oliver Nelson, Gerald Wilson, Frank Capp/Nat Pierce, and the Clayton-Hamilton Jazz Orchestra. He also worked as a studio musician and a music educator.[1]

Bryant had sustained health problems in the 1990s which reduced his activity to part-time. He died in Los Angeles of a heart attack at the age of 64.[2]

This article uses material from the article Bobby Bryant (musician) from the free encyclopedia Wikipedia and it is licensed under the GNU Free Documentation License.

Don't Be That Way Benny's From Heaven
Update Required To play the media you will need to either update your browser to a recent version or update your Flash plugin.