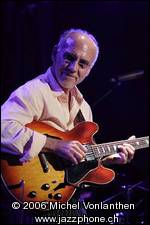 Larry Eugene Carlton (born March 2, 1948) is an American guitarist who built his career as a studio musician in the 1970s and '80s for acts such as Steely Dan and Joni Mitchell. He has participated in thousands of recording sessions, recorded on hundreds of albums in many genres, for television and movies, and on more than 100 gold records. He has been a member of the jazz fusion groups The Crusaders and Fourplay and has maintained a long solo career.[1]

Carlton was born in Torrance, California in 1948 and at the age of six began guitar lessons. His interest in jazz came from hearing guitarist Joe Pass on the radio. From Pass he moved on to jazz guitarists Barney Kessel and Wes Montgomery and blues guitarist B.B. King. He went to junior college and Long Beach State College while playing professionally at clubs in Los Angeles.[1]

His guitar work on Steely Dan's "Kid Charlemagne" from their 1976 LP The Royal Scam was ranked No. 80 on a list of the best guitar songs by Rolling Stone magazine.[2]

Carlton recorded his debut solo album, With a Little Help from My Friends, in 1968. In the mid-'70s he built a home studio and called it Room 335 after the Gibson ES-335, an electric guitar he played often. He has recorded most of his albums at Room 335. In 1988, with his solo career in ascent, he was shot in the throat by a teenager outside Room 335 and suffered nerve and vocal cord damage, which delayed completion of the album he was working on at the time, On Solid Ground.[1][3] His left arm was paralyzed and for six months he was unable to play more than a few notes.[4]

Carlton produced six albums from 1978 to 1984. His version of "Sleepwalk" by Santo Farina climbed the pop and adult contemporary charts. From 1985-1990 he did various solo projects, including the live album Last Nite.

Carlton was commissioned to compose music for the king of Thailand, Bhumibol Adulyadej, in honor of the king's birthday.[1] He recorded The Jazz King (Sony BMG, 2008) with a jazz orchestra that included Tom Scott, Nathan East, and Earl Klugh.[5]

Carlton is best known for his 1969 Gibson ES-335.[6] Other guitars he owns and plays include a 1951 Fender Telecaster, a 1964 Fender Stratocaster, and a 1955 Gibson Les Paul Special.[7] He has used a Fender Vibrolux amplifier, but his standard setup included a Dumble.[6]

Carlton married contemporary Christian music artist Michele Pillar in 1987; they divorced in 2013. He is the father of Katie Carlton and bass player Travis Carlton.

This article uses material from the article Larry Carlton from the free encyclopedia Wikipedia and it is licensed under the GNU Free Documentation License.