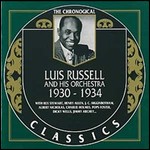 Luis Carl Russell was born on Careening Cay, near Bocas del Toro, Panama, in a family of Afro-Caribbean ancestry. His father was a music teacher, and young Luis learned to play guitar, piano, and violin. He began playing professionally, accompanying silent films by 1917 and later at a casino in Colón.

He won $3000 in a lottery and used it to move to the U.S. with his mother and sister, settling in New Orleans, Louisiana, where he worked as a pianist. He moved to Chicago in 1925 and worked with Doc Cook and King Oliver. The Oliver band moved to New York City, and Russell left to form his own band. By 1929, Russell's band became one of the top jazz groups in New York City. It had several former Oliver sidemen. Noteworthy players in his band included trumpeter Red Allen, trombonist J. C. Higginbotham, and alto saxophonist Albert Nicholas. Louis Armstrong took over the band in 1935.[1]

The band returned to Russell's name while Armstrong played in California and Europe in the early 1930s; Russell and Armstrong were reunited in 1935. They again split paths in 1943 when Russell formed a new band under his own name, which played at the Savoy and Apollo in Manhattan and Atlantic City, New Jersey.

Between 1926 and 1934, Russell recorded 38 sides (mostly using his own name), plus those issued under Red Allen (1929) and a handful where Armstrong led his band. After the OKeh contract ended in September 1930, Russell recorded a handful of sessions for Melotone, Brunswick and Victor. After no recordings under his name between late 1931 and late 1934, Russell recorded a session for ARC (Melotone, Perfect, Oriole, Banner, Romeo) in 1934 which yielded six very precise modern recordings (three featured Sonny Woods's novelty vocals, one featured the vocal group the Palmer Brothers.

In 1935 Armstrong took over the orchestra altogether, and for the next eight years they functioned as back-up band for Armstrong with Russell acting as the musical director. Russell led a new band from 1943 to 1948 that played at the Savoy and Apollo and made a few recordings. The most notable of those recordings was his 1946 version of the pop standard, "The Very Thought of You".

In 1948 Russell retired from music and opened a notions shop, with irregular band gigs and teaching music on the side. In 1959 he visited Panama where he gave a piano recital of classical music. He died in New York City at the age of 61. His daughter, Catherine Russell, is a jazz singer.

This article uses material from the article Luis Russell from the free encyclopedia Wikipedia and it is licensed under the GNU Free Documentation License.