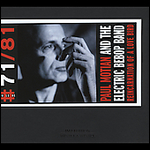 He first came to prominence in the late 1950s in the piano trio of Bill Evans, and later was a regular in pianist Keith Jarrett's band for about a decade (c. 1967–1976). Motian began his career as a bandleader in the early 1970s. Perhaps his two most notable groups were a longstanding trio of guitarist Bill Frisell and saxophonist Joe Lovano, and the Electric Bebop Band which featured the drummer working mostly with younger musicians doing interpretations of bebop standards.

Motian was born in Philadelphia, Pennsylvania, and raised in Providence, Rhode Island. He is of Armenian descent. After playing guitar in his childhood, Motian began playing the drums at age 12, eventually touring New England in a swing band. During the Korean War he joined the Navy.

Motian became a professional musician in 1954, and briefly played with pianist Thelonious Monk. He became well known as the drummer in pianist Bill Evans's trio (1959–64), initially alongside bassist Scott LaFaro and later with Chuck Israels.[4][5]

Later in his career, Motian became an important composer and group leader,[7] recording initially for ECM Records in the 1970s and early 1980s and then for Soul Note, JMT, and Winter & Winter before returning to ECM in 2005.[4] From the early 1980s he led a trio featuring guitarist Bill Frisell and saxophonist Joe Lovano, occasionally joined by bassists Ed Schuller, Charlie Haden, or Marc Johnson, and other musicians, including Jim Pepper, Lee Konitz, Dewey Redman and Geri Allen. In addition to playing Motian's compositions, the group recorded tributes to Thelonious Monk and Bill Evans, and a series of Paul Motian on Broadway albums, featuring original interpretations of jazz standards.

Despite his important associations with pianists, Motian's work as a leader since the 1970s rarely included a pianist in his ensembles and relied heavily on guitarists. Motian's first instrument was the guitar, and he apparently retained an affinity for the instrument: in addition to his groups with Frisell, his first two solo albums on ECM featured Sam Brown, and his Electric Bebop Band featured two and occasionally three electric guitars. The group was founded in the early 1990s, and featured a variety of young guitar and saxophone players, in addition to electric bass and Motian's drums, including saxophonists Joshua Redman, Chris Potter, Chris Cheek, and Tony Malaby, and guitarists Kurt Rosenwinkel, Brad Shepik, Wolfgang Muthspiel, Steve Cardenas, Ben Monder, and Jakob Bro.

In 2011 Motian featured on a number of new recordings, including Live at Birdland (with Lee Konitz, Brad Mehldau and Charlie Haden), Samuel Blaser's Consort in Motion, No Comment by Augusto Pirodda, and Further Explorations with Chick Corea and Eddie Gómez. Bill McHenry's Ghosts of the Sun was released - by coincidence - on the day of Motian's death. Motian's final album as bandleader was The Windmills of Your Mind, featuring Bill Frisell, Thomas Morgan and Petra Haden.

CAM Jazz released a box set titled Paul Motian in September 2010. This release compiles a number of albums which were originally issued by the Soul Note label: The Story of Maryam, Jack of Clubs, Misterioso, Notes (with Paul Bley), One Time Out (with Bill Frisell and Joe Lovano) and Flux and Change (duet with Enrico Pieranunzi).

In November 2012, Winter & Winter released Paul Motian on Broadway Vol. 1, 2, 3, 4, 5 which collects the five volumes of On Broadway into a single set.

ECM Records released a box set titled Paul Motian in April 2013, as part of the label's continuing Old & New Masters Edition series. This set compiles the six albums that Motian recorded for ECM between 1972 and 1984; Conception Vessel, Tribute, Dance, Le Voyage, Psalm and It Should've Happened a Long Time Ago.

The first posthumous release to feature Motian was Sunrise by the Masabumi Kikuchi Trio (with Thomas Morgan), released in March 2012 by ECM. This was followed in July 2012 by Owls Talk by Alexandra Grimal (also featuring Lee Konitz and Gary Peacock), released by Harmonia Mundi.

Two live recordings, led by pianist Enrico Pieranunzi, have been released by CAM Jazz; New York Reflections: Live at Birdland (with Steve Swallow) was released in October 2012 (exclusively in vinyl format), while Live at the Village Vanguard (with Marc Johnson) was issued in March 2013.

CAM Jazz reissued One Time Out in March 2013, in 180g vinyl format. A compact disc edition is supplied with it. One Time Out was also issued on CD as part of the CAM Jazz Paul Motian boxset.

Motian compositions recorded by others and tributes

Motian Sickness – The Music of Paul Motian (for the Love of Sarah) was released in September 2011, featuring Jeff Cosgrove, John Hebert, Mat Maneri and Jamie Masefield.[9]

Russ Lossing's Drum Music: Music of Paul Motian (Solo Piano) was released in July 2012 by Sunnyside Records.[11] Lossing originally recorded the album to celebrate Motian's 80th birthday; he has published a video on YouTube about the recording.[12]

This article uses material from the article Paul Motian from the free encyclopedia Wikipedia and it is licensed under the GNU Free Documentation License.

Mirrorland Organ-X
Update Required To play the media you will need to either update your browser to a recent version or update your Flash plugin.