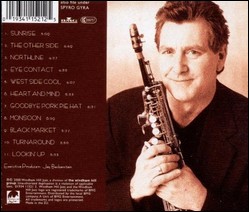 Jay B. Beckenstein (born May 14, 1951 in Long Island, New York) is a saxophone player, smooth jazz artist and together with Jeremy Wall founded Spyro Gyra. He also owned a studio in New York that was called BearTracks Studios.

He also played the saxophone solo on American progressive metal band Dream Theater's "Another Day", from the album Images and Words and single version of song "Through her Eyes", from the album Metropolis Pt. 2: Scenes from a Memory. He also played a solo part in "Take Away My Pain" on the live album Once in a Livetime as well as "Another Day" during the performance of Metropolis 2000: Scenes from New York.

Jay Beckenstein was born in Long Island, New York to a Jewish family, his mother, Lorraine, was an opera singer and his father, Leonard, loved jazz and introduced him to Charlie Parker and Lester Young when he was a baby. He started playing the piano at age 5 when he moved to Farmingdale, LI. He was given his first saxophone at the age of 7. In his senior year of high school, he and his family moved to Germany. He attended and graduated from Nürnberg American High School in 1969. He has spoken that being Jewish in Germany was positive at the time. However, he has recalled that he once saw an old photo of an elderly neighbor in his SS Nazi uniform while visiting him and he never went back. He received a BA in music from the University at Buffalo in 1973. Trumpeter Dizzy Gillespie once played with the college band while Beckenstein was a band member.[1]

It was in college during summer breaks that he and an old high school friend, Jeremy Wall, played gigs around Long Island. It was until they played at a bar that they came up with spirogyra after looking at it written on a piece of paper under a microsope, but the bar owner misspelled it. Beckenstein has said, "It sounds like what we do - like a lot of motion and stuff". They soon recruited then-16-year-old keyboardist Tom Schuman and worked on recording their debut album. However, due to lack of funds, the record was going to be their last album until they gave it away and sold 100,000 copies. From there, they got a deal and released their next album in 1979.

Beckenstein is divorced and has three daughters.[1]

Beckenstein plays alto, soprano and tenor saxophone. In the early years of Spyro Gyra he played a Selmer Mark VI alto saxophone, before changing to Yamaha in the 1980s. Until the late 1990s he played a Yamaha YAS-62 alto (Beechler White Diamond S6S mouthpiece and Vandoren No. 3½ reeds) and YSS-62 (Selmer C* mouthpiece) soprano saxophones.[3] However, he subsequently switched to instruments made by LA Sax. His current alto is the "Chicago Jazz" model by LA Sax,[4] fitted with a Beechler White Diamond S6S mouthpiece and Vandoren Traditional No. 3 Reeds. His soprano is a Keilwerth SX90 with a black-nickel finish and gold hardware, fitted with a Selmer C* mouthpiece and Vandoren Traditional No. 3 reeds. His "burnished brass" finish tenor is also made by LA Sax.

Beckenstein is an endorser of Orpheo flutes, clarinets, and saxophones.[5]

This article uses material from the article Jay Beckenstein from the free encyclopedia Wikipedia and it is licensed under the GNU Free Documentation License.

Coral Keys Michale Neff Quintett
Update Required To play the media you will need to either update your browser to a recent version or update your Flash plugin.