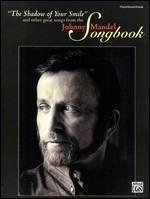 Mandel was born in New York City, to Alfred, a garment manufacturer, and Hannah, an opera singer, who discovered her son had perfect pitch at the age of five.[1] Mandel was subsequently given piano lessons, but switched to the trumpet and later the trombone.[1]

He studied at the Manhattan School of Music and the Juilliard School. In 1943 he played the trumpet with Joe Venuti, in 1944 with Billy Rogers and trombone in the bands of Boyd Raeburn, Jimmy Dorsey, Buddy Rich, Georgie Auld and Chubby Jackson. In 1949 he accompanied the singer June Christy in the orchestra of Bob Cooper. From 1951 till 1953 he played and arranged music in Elliot Lawrence's orchestra, and in 1953 with Count Basie. Later he resided in Los Angeles, where he played the bass trumpet for Zoot Sims.

Mandel has composed, conducted and arranged the music for numerous movie sound tracks. His earliest credited contribution was to I Want to Live! in 1958, which was nominated for a Grammy.

Mandel's most famous compositions include "Suicide Is Painless" (theme from the movie and TV series M*A*S*H), "Close Enough for Love", "Emily" and "A Time for Love" (nominated for an Academy Award). He has written numerous film scores, including the score of The Sandpiper. The love theme for that film, "The Shadow of Your Smile", which he co-wrote with Paul Francis Webster, won the 1965 Academy Award for Best Original Song and the Grammy Award for Song of the Year in 1966.

He performed an interpretation of Erik Satie's "Gnossiennes #4 and #5" on the piano for the 1979 film Being There.

He won the Grammy Award for Best Instrumental Arrangement Accompanying Vocal(s) in 1981 for Quincy Jones's album Velas, and again in 1991 for Natalie Cole and Nat King Cole's "Unforgettable", and one year later once more for Shirley Horn's album Here's to Life.

In 2004, Mandel arranged Tony Bennett's album The Art of Romance. Bennett and Mandel had collaborated before on Bennett's The Movie Song Album (1966), for which Mandel arranged and conducted his songs "Emily" and "The Shadow of Your Smile", and was also the album's musical director.

Mandel received an Honorary Doctorate of Music from Berklee College of Music in 1993.

Mandel is a recipient of the 2011 NEA Jazz Masters Award.[8]

Mandel's most recent project is a CD called Johnny Mandel, A Man and His Music, featuring The DIVA Jazz Orchestra and vocalist Ann Hampton Callaway, recorded live at Jazz at Lincoln Center's Dizzy's Club Coca-Cola in May 2010, released by Arbors Records in March 2011.[9]

This article uses material from the article Johnny Mandel from the free encyclopedia Wikipedia and it is licensed under the GNU Free Documentation License.