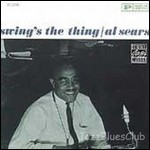 Sears was born in Macomb, Illinois. His first major gig came in 1928 when he replaced Johnny Hodges in Chick Webb's ensemble. Following this he played with Elmer Snowden (1931–32), then led his own groups between 1933 and 1941. In the early 1940s he was with Andy Kirk (1941–42) and Lionel Hampton (1943-44) before he became a member of Duke Ellington's Orchestra in 1944, replacing Ben Webster. He became one of Ellington's best-known soloists and remained in his employ until 1949, when first Jimmy Forrest and then Paul Gonsalves took over his chair. He played with Johnny Hodges in 1951–52 and recorded the tune "Castle Rock" with him; the tune became a hit but was released under Hodges's name.

Sears was in Alan Freed's band when Freed did live shows, being introduced as "Big Al Sears." He played as a studio musician on a variety of R&B albums in the 1950s and recorded two albums for Swingville Records in 1960. He also owned several record labels, including Arock, Serock, and Gator.[1]

This article uses material from the article Al Sears from the free encyclopedia Wikipedia and it is licensed under the GNU Free Documentation License.

As The Years Go Passing By Backyard Blues Connection
Update Required To play the media you will need to either update your browser to a recent version or update your Flash plugin.