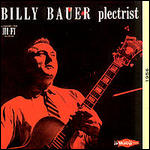 William Henry Bauer was born in New York City. He played ukulele and banjo as a child before switching to guitar.[1][2] He played with the Jerry Wald band and recorded with Carl Hoff and His Orchestra in 1941[2] before joining Woody Herman in 1944 as a member of the First Herd. In 1946 he played with Benny Goodman and Jack Teagarden.

Working in small groups led by bassist Chubby Jackson and trombonist Bill Harris, Bauer established himself as a soloist in the bebop movement.

In 1946 he began working with Lennie Tristano. Tristano and Bauer enjoyed a natural synergy in their style and approach. Their development of "intuitive music"[3] led to the 1949 session which included "Intuition", and "Digression". He was a member of the NBC Tonight Show band in New York City and played in the Today Show band at the start of early television.

Bauer continued his pioneering guitar work in a partnership with Lee Konitz, whose avant-garde saxophone work was a perfect match for Bauer's guitar. The two musicians' dialogue crossed styles from bop and cool to the avant-garde. Their recordings have been described as "some of the most beautiful duet recordings in jazz".[4] "Duet For Saxophone and Guitar" was an unusual instrument pairing which has been described as redefining the role of jazz guitar.[2]

Bauer made one album under his own name, Plectrist, in 1956. The CD reissue has been described as "demand[ing] the attention of anyone even remotely interested in jazz guitar".[5] Later, he arranged the song "No One" that appeared on the CD Henry Golis Presents Good Music with Friends, which was released on Park Lane Drive Records in 2007.

In later life Bauer taught at the New York Conservatory of Modern Music and his own Billy Bauer Guitar School, first in Albertson, New York, then in Roslyn Heights, New York.[2] He also published instructional books on studying music and playing the guitar.

Near the end of his career, Bauer appeared at the 1997 JVC Tributes for Barney Kessel and Tal Farlow. Bauer led the way for guitarists like Jimmy Raney and student Joe Satriani.

This article uses material from the article Billy Bauer from the free encyclopedia Wikipedia and it is licensed under the GNU Free Documentation License.