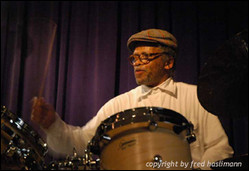 Ntshoko played with Dollar Brand's trio in 1958, and recorded in a sextet with Hugh Masekela and John Mehegan in 1959. Ntshoko plays on the Jazz Epistles album Jazz Epistle: Verse 1, one of the most prominent examples of South African hard bop. After the breakup of the group Ntshoko founded his own group, the Jazz Giants, with Kippie Moeketsi, Dudu Pukwana, Gideon Nuxmalo, and Martin Mgijima.

Ntshoko embarked on a tour of the United States and the Bahamas in the early 1970s. He and Masekela recorded again in 1972. In 1974, he founded an ensemble he called Makaya and the Tsotsis with Heinz Sauer, Bob Degen, and Isla Eckinger (later Jürgen Wuchner). Concomitantly he played in Nicra with Nick Evans and Radu Malfatti in 1975. He played with Joe McPhee and Pepper Adams at the Willisau Jazz Festival in 1975. He and Mal Waldron collaborated from 1977 to 1979.

Little is known of Ntshoko's whereabouts in the 1980s. He played at the Montreux Jazz Festival with Stephan Kurmann in 1991 and formed a new band called Makaya and The New Tsotsis with Andy Scherrer (sax), Vera Kappeler (piano) and Stephan Kurmann (double bass) In august, 2008 he played a concert in France at "Les Nuits et les Jours de Querbes" festival with Andy Scherrer, Bänz Oester and Colin Vallon

This article uses material from the article Makaya Ntshoko from the free encyclopedia Wikipedia and it is licensed under the GNU Free Documentation License.

Everyday I Have The Blues Jimmy McGriff
Update Required To play the media you will need to either update your browser to a recent version or update your Flash plugin.