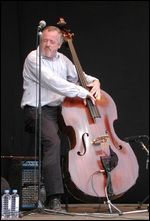 Ørsted Pedersen was born in Osted, near Roskilde, on the Danish island of Zealand, the son of a church organist. As a child, Ørsted Pedersen played piano, but from the age of 13, he started learning to play upright bass and at the age of 14, while studying, he began his professional jazz career in Denmark with his first band, Jazzkvintet 60 (Danish for 'Jazz Quintet 60'). By the age of fifteen, he had the ability to accompany leading musicians at nightclubs, working regularly at Copenhagen's Jazzhus Montmartre, after his debut there on New Year's Eve 1961, when he was only 15. When seventeen, he had already turned down an offer to join the Count Basie orchestra, mainly because he was too young to get legal permission to live and work as a musician in the United States.

The Montmartre was a regular stop-off for touring American Jazz stars, and as a member of the house band, the young Ørsted Pedersen performed with saxophonists such as Sonny Rollins, Dexter Gordon, Rahsaan Roland Kirk and Stan Getz, and pianist Bill Evans, with whom he toured in Europe in 1965. During the 1960s, Ørsted Pedersen played with a series of other important American jazzmen who were touring or resident in Denmark, including Ben Webster,[3] Brew Moore, Bud Powell, Count Basie, Roy Eldridge, Dizzy Gillespie, Jackie McLean, and vocalist Ella Fitzgerald. He also played with Jean-Luc Ponty, and became the bassist of choice whenever a big-name musician was touring Copenhagen.

He was awarded Best Bass Player of the Year by Downbeat Critics' Poll in 1981.[4]

Ørsted Pedersen worked in duo and trio arrangements with pianist Kenny Drew, recording over 50 albums together. He also worked with Stéphane Grappelli and Joe Pass and recorded extensively as a leader. His best known songs are "My Little Anna", "Jaywalkin'", and "The Puzzle", as well as jazz arrangements of traditional Danish folk songs. A duo performance with Rune Gustafsson at Vossajazz 1980, concluded on the album Just The Way You Are on the label Sonet Gramofon, recorded half a year after this first meeting. He was awarded the Nordic Council Music Prize in 1991. This was the first time this prize for composition was awarded to a performing musician, and this must be ascribed to his great international standing. He was presumably the most sought-after Danish instrumentalist internationally ever, and had traveled and recorded with a series of the greatest jazz soloists internationally.

Ørsted Pedersen also had a particular ability to interpret Danish songs and folk melodies. He often played within trio ensembles, partly collectively with the trumpeter Palle Mikkelborg and the keyboard player Kenneth Knudsen, and partly under his own name, usually with guitarists like Philip Catherine and Ulf Wakenius. In 1999, he co-led a duo with pianist Mulgrew Miller, touring Europe, Japan, Australia, and Korea. This format was later enlarged into a trio featuring drummer, Alvin Queen. This trio remained intact until Pedersen's death.[1]

Ørsted Pedersen died of heart failure in 2005 at the age of 58 in Copenhagen, Denmark. He was survived by his wife, Solveig, and his three children.[5] Oscar Peterson wrote:

After hearing this phenomenal talent on bass, I realized that somehow, someday we should meet, thereby giving me the opportunity to also play with him. This vision and thought took place in the early 1970s, when I was fortunate enough to be able to invite him to join my then trio.

Allow me to express my reaction to his playing this way: First and foremost, he never got in my way--but he also had such a great musical perception of what I was trying to do that he served to greatly inspire me from a spontaneous aspect. I came off walking on Cloud 3000 that evening because of Niels' musical contribution. He had the most phenomenal technique, coupled with incredible harmonic perception, along with impeccable time. I shall never forget that evening. Almost from that evening on, we became very close friends, not just musically but most certainly personally, for I developed a great admiration for the depth of Niels' political, geographical and personal understandings. He was a man who had an almost unbelievable wealth of historic cognizance pertaining to European history. He also had a very kindred spirit as a human being, always able to easily make good friends, should he care to do so.

This article uses material from the article Niels-Henning Ørsted Pedersen from the free encyclopedia Wikipedia and it is licensed under the GNU Free Documentation License.

It Must Be Love Bill Evans
Update Required To play the media you will need to either update your browser to a recent version or update your Flash plugin.