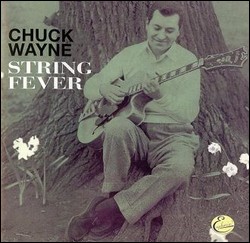 Chuck Wayne (February 27, 1923 – July 29, 1997) was a jazz guitarist who came to prominence in the 1940s. He was one of the first jazz guitarists to play in the bebop style. Wayne was a member of Woody Herman's First Herd, the first guitarist in the George Shearing quintet, and Tony Bennett's music director and accompanist. He developed a systematic method for playing jazz guitar.

Wayne was noted for a bebop style influenced by saxophone players of his time, especially Charlie Parker and Coleman Hawkins. In an era when many guitarists used four-square, mandolin-style picking, with rigid up-down stroke articulation, Wayne developed a technique not widely adopted by others until decades later. He also developed a comprehensive approach to guitar chords and arpeggios – based on generic tetrad forms spanning all possible inversions, in varying degrees of open voicing. This highly analytic approach to the fretboard was later documented in a series of theory books, some released posthumously.

Chuck Wayne was born Charles Jagelka in New York City to a Czechoslovakian family. As a boy he learned banjo, mandolin, and balalaika. In the early 1940s he began playing in jazz bands on 52nd Street. After two years in the Army, he returned to New York City and joined Joe Marsala's band. He changed his musical style after hearing Charlie Parker, recording with Dizzy Gillespie in 1945.[1] Frustrated with the difficulty of getting the sound he wanted, he considered switching to saxophone. Bill Crow writes that Wayne was one of the first jazz guitarists to learn bebop. Two examples are "Groovin' High" and "Blue 'n' Boogie" recorded with Dizzy Gillespie.[2]

Wayne was a member of Woody Herman's First Herd and worked with Coleman Hawkins, Red Norvo, Bud Powell, Jack Teagarden, George Shearing, Lester Young, and Barbara Carroll. During the 1950s, he worked with Tony Bennett, Gil Evans, Brew Moore, Zoot Sims, and George Wallington. He was employed as staff guitarist for CBS in the 1960s. For the next two decades, he played on Broadway, accompanied vocalists, and performed in guitar duos with Joe Puma and Tal Farlow.[1]

Wayne wrote "Sonny" in honor of Sonny Berman. Years later, Miles Davis took the song, renamed it "Solar", and claimed he wrote it.[1][3] Wayne's "Butterfingers" and "Prospecting" have been incorrectly attributed to Zoot Sims.

Wayne recorded his debut album, The Jazz Guitarist (Savoy, 1956) with Zoot Sims and Brew Moore. He recorded in a trio for Tapestry (1963) and Morning Mist (Original Jazz Classics, 1964) and in a duo with Joe Puma on Interactions (Choice, 1973).[1]

He made a famously unpopular album of banjo jazz in 1963. He loved the crisp, hornlike sound that was possible with the banjo, and he predicted there would be a resurgence of interest in the banjo.

In Wayne's technique, movement of the pick comes mostly from the joints of the first finger and thumb, not the wrist, hand, or arm. The pick is not held rigidly; its angle changes slightly as it passes over the string. The tip of the pick drags slightly during each stroke so that the tip points up during a down stroke and down during an up stroke. This resembles the apoyando, or rest stroke, used by classical guitarists, particularly if the movement is exaggerated with slow, deliberate strokes, allowing the pick to stop on the adjacent string.

When moving between adjacent strings, the guitarist continues a single up stroke or down stroke to play consecutive notes on two strings. Thus, when moving to a higher string (higher in pitch), the down stroke continues over two strings; when moving to a lower string, the up stroke continues. When more than two notes are played on a single string, the guitarist alternates strokes (or uses a slur, depending on the phrasing). This technique eliminates the "plinka-plinka" of traditional alternate picking and allows smooth, rapid playing.

In rapid passages, the right hand is typically anchored, lightly, by touching the pinky fingernail to the pick guard, which itself should be placed near and slightly below the first string. A narrow pick guard for this use, usually of ebony, became known among luthiers as a "Chuck Wayne style pick-guard" or more accurately as a "finger rest."[6] Some guitarists have referred to consecutive/alternative picking as "spray picking", although Wayne disliked this term.

Wayne was an exponent of the use of the right-hand fingers in combination with the pick. He synthesized plectrum and classical guitar technique. The pick is held in the normal way, but the remaining three fingers are used to play chords and counterpoint. Wayne often surprised audiences by using this method to play difficult Bach fugues and other pieces from classical music. His use of the technique for contrapuntal improvisation was an innovation.

Wayne's chord system is based on "generic" chord forms, forms that have the same sonority in all keys, and that do not rely on open strings or guitaristic peculiarities.

Most chord books have diagrams organized by chord name (A13, Gm7b5) or type (thirteenth, minor seven-flat-five). Under each heading are the fingerings that show the chord in alternative inversions and voicings, generally having little in common other than a shared set of notes. The guitarist memorises the forms, learning a few different ways to play each chord. Over time, through practical experience, the guitarist learns or decides when to use each form. When playing in Bb, such a guitarist will inevitably play with a very different set of voicings from what would be used in F or Eb, simply because the "normal" guitar chords in these keys have very different sonorities. Wayne tried to describe the "complete" scope of harmonic possibilities available on the fretboard, in all voicings, given conventional guitar tuning and a human left hand.

In Wayne's system, a generic chord has four different notes. This includes chords like dominant sevenths, major sixths, and minor ninths, but not major or minor triads, or other "specific" triadic forms, which Wayne concluded were rarely useful for jazz. For chords containing five or more notes, such as thirteenths and ninths, Wayne removed the root, and other notes if necessary, to preserve the generic four-note form.

Since there are four different notes in each of Wayne's chords, there are four possible starting notes or inversions. (When such a chord contains the root, it is an inversion in the traditional sense; otherwise, it is a revoicing. For convenience, Wayne calls all such transformations "inversions".) The remaining notes are then arranged above it.

Wayne realized that the close voicing normally used on pianos – i.e. where an entire chord is played within the same octave – is not usually practical on the guitar. He found that the most useful generic fingerings could be obtained by raising or lowering one or more of the four notes by an octave.

[The following descriptions cover the main elements of Wayne's chord system; but these may be hard to visualize. Wayne's method books, listed below, are the best source for diagrams and details.]

Use of Wayne's chords

Jazz musicians are very much attuned to how "open" a chord sounds; generally, the more open the voicing, the less chance of conflict between the chord and melody or improvisation. For this reason, while comping, Wayne especially used the spread and split voicings, which have the most "open" sound in his system. The other forms, being more "closed", are often chosen in arrangements using counterpoint and melody. However, there are no hard-and-fast rules for choosing a particular form in a given situation.

Surprisingly, Wayne's approach reveals many chord forms that are comfortable to play but rarely seen, except in classical guitar fingerings. This is particularly true of inversions that begin on the third or sixth/seventh, and also of certain split and spread voicings. In Wayne's heyday, experienced guitarists were often puzzled to watch him playing chord shapes that they didn't even recognize, chords with subtle differences from the norm. Wayne's novel strategy gave him an exceptionally wide harmonic palette, helping him avoid the sameness often found in the playing of guitarists – even some great ones.

Wayne's scale fingerings were designed to maximize use of consecutive/alternate picking, and thus to provide a legato feel. His basic scale fingerings are simple, although he also created various extended forms. Like his analytic approach to chords, his scale fingerings provide a single structure that can be applied to a variety of scale forms.

However, by generally playing three notes per string, consecutive picking across adjacent strings occurs frequently throughout the scale when forming a melodic line.

The arpeggios in Chuck Wayne's system were explained in his book with his student, Ralph Patt.[8] His arpeggios are derived from the rule for each two-octave arpeggio: 2-1-2-1-2 (five strings) for playing the tetrad (4 notes) harmonic forms of Chuck Waynes' chordal voicings. Unlike other ad-hoc arpeggio fingerings, the two notes per string followed by one note per string rule provides the characteristic legato sound of Chuck Wayne. Combined with the consecutive-alternate picking, the arpeggios resemble harp-like flows. Present day jazz guitarists refer to the harp-like sound as "sweep" although Chuck Wayne disliked this term since it refers to a broom.[9]

There is a close relationship between Wayne's chord system and his arpeggio forms. A major milestone for Wayne's students was to experience a mental synthesis of his chord system and the arpeggio structures – revealing the internal relationships that link families of chords. Reaching this plateau would "unlock the fretboard", transforming it into something that could be approached more like a piano keyboard. This happens because Wayne's tetrad chord shapes are contained within the 2-1-2-1-2 fingerings.

Another dimension of Chuck Wayne's style was his method of playing octaves. Since Chuck Wayne was an advanced classic guitarist as well as a plectrum player, he combined the two forms to play octaves. His right hand held the pick between the first finger and thumb to play the low note of the octave. His middle finger and ring finger alternated to play the upper note of the octave. His left hand used the "skip one" string form, which is using the index finger for the low note and the fourth finger for the upper note. In order to keep the left hand in position, the fourth finger is used to play the lower note and the first finger is used to play the upper note using the "skip two" (strings) form.

Putting it all together

The figure below depicts the major 7th tetrads (and the minor 9th equivalent) for the spread voicings as well as the arpeggios and the basic scales that correspond to one another in Chuck Wayne's "complete system" of jazz guitar. The vertical bar on the left of the chart(s) marks the tonic on the low E. Notice that the minor 9 framework does not have a tonic (root), since the first note is the 9th.

This article uses material from the article Chuck Wayne from the free encyclopedia Wikipedia and it is licensed under the GNU Free Documentation License.

Lee's Lament Junior Mance Trio
Update Required To play the media you will need to either update your browser to a recent version or update your Flash plugin.