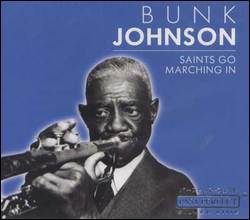 Bunk gave the year of his birth as 1879, although there is speculation that he may have actually been younger by as much as a decade.

Bunk received lessons from Adam Olivier and began playing professionally in Olivier's orchestra. Bunk probably played a few adolescent jobs with Buddy Bolden, but was not a regular member of Bolden's Band for any length of time (contrary to Bunk's claim). Bunk was regarded as one of the top trumpeters in New Orleans in the years 1905-1915, in between repeatedly leaving the city to tour with minstrel shows and circus bands. After he failed to appear for a New Orleans Mardi Gras parade job in 1915, he learned the krewe members intended to do him bodily harm, and so he left town, touring with shows and then settling in New Iberia, Louisiana. In 1931 he lost his trumpet and front teeth when a violent fight broke out at a dance in Rayne, Louisiana, putting an end to his playing. He thereafter worked in manual labor, occasionally giving music lessons on the side when he could.

In 1938 and 1939 the researchers/writers of the first book of jazz history, Jazzmen, interviewed several prominent musicians of the time, including Louis Armstrong, Sidney Bechet, and Clarence Williams, who spoke very highly of Bunk in the old days in New Orleans. The writers tracked down Bunk's address, and traded several letters with him, where Bunk recalled (and possibly embellished) his early career. Bunk stated that he could play again if he only had new teeth and a new trumpet. A collection was taken up by writers and musicians, and Bunk was fitted with a set of dentures (by Bechet's dentist brother, Leonard) and given a new trumpet, and in 1942 made his first recordings.

These first recordings propelled Bunk (along with clarinetist George Lewis) into public attention, attracting a cult following. Bunk and his band played in New Orleans, San Francisco, Boston, and New York City and made many more recordings. Bunk's work in the 1940s show why he was well regarded by his fellow musicianson his best days playing with great imagination, subtlety, and beautyas well as suggesting why he had not achieved fame earlier, for he was unpredictable, temperamental, with a passive-aggressive streak and a fondness for drinking alcohol to the point of serious impairment.

Bunk suffered from a stroke in late 1948 and died in New Iberia the following year.

Jazz fans and historians still debate Bunk's legacy, and the extent to which his colorful reminiscences of his early career were accurate, misremembered, exaggerated, or untrue.

The majority of his recordings remain in print on CD reissues, and his playing is an important influence on many contemporary traditional jazz musicians. Johnson plays a small, but significant, role in Alan Schroeder's picture book "Satchmo's Blues." In that book, Johnson serves as a source of musical inspiration to the young Louis Armstrong.

This article uses material from the article Bunk Johnson from the free encyclopedia Wikipedia and it is licensed under the GNU Free Documentation License.