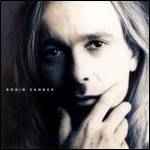 Zander was born in Beloit, Wisconsin, the fourth of five children; he has two older brothers, and older and younger sisters.

Zander reportedly was reading books by age three, and learned to play the guitar by age 12. He played with his first group, The Destinations, while in seventh grade. The next year he was with a group called Butterscotch Sundays, playing summer festivals, and after that formed a band called Robin and the Hoods. In high school, Zander sang for three years in the Madrigals, the most demanding of the three choral groups at his school, played basketball and football, and had a part-time job at a sandwich shop.

In 1972, Zander was offered the lead singer role in a new band called Cheap Trick by the group's drummer, Bun E. Carlos. At the time, Zander was under contract with a resort in Wisconsin Dells, where he sang and played cover songs, and Cheap Trick had a lead vocalist, Randy "Xeno" Hogan. Hogan left the band around the same time Zander's resort contract expired, and Zander joined Cheap Trick as lead singer. Guitarist Rick Nielsen introduces Zander at concerts as his "favorite lead singer in the whole wide world".

Zander and his Cheap Trick band mates had cameo roles in the 2003 Eddie Murphy comedy Daddy Day Care. Zander continues to perform with Cheap Trick around the world. In 2008, the group played in Japan for the 30th anniversary of their original Budokan album release.

Robin Zander released the solo album Robin Zander in 1993. A country-rock album, Countryside Blvd. was released online in 2011 but was pulled from online music outlets within hours of being released. In January of 2013 Zander formed The Robin Zander Band with drummer and long time friend Steve Luongo. The band also includes Mark Hitt on guitar and Larry Hobbs on bass.

Zander currently resides in Safety Harbor, Florida with his wife, former Playboy Playmate Pamela Stein [1] and two children: a son, Robin Zander Jr., and a daughter, Robin-Sailor Zander. He owns a Bichon Frise named Daisy Mae. He has two children from a previous marriage, Ian and Holland, who currently reside in Rockford, Illinois.[2]

This article uses material from the article Robin Zander from the free encyclopedia Wikipedia and it is licensed under the GNU Free Documentation License.

Pink Panther Theme Henry Mancini feat. Plas Johnson
Update Required To play the media you will need to either update your browser to a recent version or update your Flash plugin.