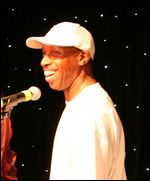 Jeffrey Osborne (born March 9, 1948) is an American funk and R&B musician, songwriter, and former lead singer of the band, L.T.D.

Osborne was born in Providence, Rhode Island. He is the youngest of 12 children and is part of a musical family. He has five brothers and six sisters, some of whom went on to have music careers (his brother Billy was an L.T.D. bandmate). Osborne's father, Clarence "Legs" Osborne, was a popular trumpeter who played with Lionel Hampton, Count Basie, and Duke Ellington and died when Osborne was thirteen.[1] Osborne started his music career in 1970 with a band called Love Men Ltd., who would later become known as L.T.D.[2] The band recorded hit singles such as "(Every Time I Turn Around) Back in Love Again", "Concentrate On You," "Love Ballad" and "Holding On (When Love Is Gone)". At first, Osborne was a drummer, but then became the lead vocalist. He left L.T.D. in late 1980 to start a solo career. His solo success includes five gold and platinum albums.[1]

In 1985, he wrote the lyrics to the Whitney Houston hit "All at Once" (music by Michael Masser). He appeared on USA for Africa's fundraising single, "We Are the World" in 1985. He would later appear on Celebrity Duets in 2006, performing "On The Wings Of Love" with Alfonso Ribeiro. Osborne lent his vocals to the theme song of the soap opera, Loving, from 1992 to 1995.[1]

Osborne had two more gold albums, Don't Stop and Emotional, the latter of which had his highest charting solo pop hit, "You Should Be Mine (The Woo Woo Song)", which peaked at #13 in 1986.

The following year, Osborne had the highest-charting hit of his career duetting with Dionne Warwick on "Love Power", which reached #12 on the Billboard Hot 100 and also topped the Adult Contemporary singles chart. This was a turning point in his pop success, as his albums and singles began charting lower and lower on the pop charts. Osborne's 1988 single "She's on the Left" would be his final Hot 100 entry, as well as his only #1 R&B hit.

After scoring two more substantial R&B hits in the early 1990s, "Only Human" and "If My Brother's in Trouble", Osborne would be absent from the charts for the remainder of the decade.

On March 1, 2010, Osborne appeared in the The Bachelor (TV series) season finale, "After the Final Rose" singing his hit "On the Wings of Love" while Bachelor Jake Pavelka took to the dance floor with his newly announced fiance, Vienna Girardi.

Occurrences of songs in the media

"Stay With Me Tonight"

This article uses material from the article Jeffrey Osborne from the free encyclopedia Wikipedia and it is licensed under the GNU Free Documentation License.