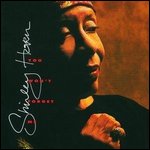 Shirley Valerie Horn (May 1, 1934 – October 20, 2005) was an American jazz singer and pianist.[1] She collaborated with many jazz greats including Miles Davis, Dizzy Gillespie, Toots Thielemans, Ron Carter, Carmen McRae, Wynton Marsalis and others. She was most noted for her ability to accompany herself with nearly incomparable independence and ability on the piano while singing, something described by arranger Johnny Mandel as "like having two heads", and for her rich, lush voice, a smoky contralto, which was described by noted producer and arranger Quincy Jones as "like clothing, as she seduces you with her voice".

Shirley Horn was born and raised in Washington, D.C..[2] Encouraged by her grandmother, an amateur organist, Horn began piano lessons at the age of four.[3] Aged 12, she studied piano and composition at Howard University, later graduating from there in classical music.[3] Horn was offered a place at the Juilliard School, but her family could not afford to send her there.[3] Horn formed her first jazz piano trio when she was 20.[3] Horn's early piano influences were Erroll Garner, Oscar Peterson and Ahmad Jamal, and moving away from her classical background, Horn later said that "Oscar Peterson became my Rachmaninov, and Ahmad Jamal became my Debussy."[3] She then became enamored with the famous U Street jazz area of Washington (largely destroyed in the 1968 riots), sneaking into jazz clubs before she was of legal age.

Horn first achieved fame in 1960, through her association with Miles Davis. Davis's praise had particular resonance in two respects: because he was so highly respected as a musician, and because he rarely offered public praise for fellow musicians at that time. Horn had, though, recorded several songs with violinist Stuff Smith in 1959, both as a pianist and a singer. After her discovery by Davis, she recorded albums on different small labels in the early 1960s, eventually landing contracts with larger labels Mercury Records and Impulse Records. She was popular with jazz critics, but did not achieve significant popular success.

Quincy Jones attempted to make Horn into a pure vocalist in several recording sessions, something he later hinted may have been a mistake. Horn was also disturbed by the changes in popular music in the 1960s, following the arrival of The Beatles. Largely rejecting efforts to remake her into a popular singer, she stated: "I will not stoop to conquer."[4] From the late-1960s, she concentrated on raising her daughter Rainy with her husband, Shepherd Deering (whom she had married in 1955), and largely limited her performances to her native Washington, D.C.

Miles Davis made a rare appearance as a sideman on Horn's 1991 album You Won't Forget Me.[5] Although she preferred to perform in small settings, such as her trio, she also recorded with orchestras, as on the 1992 album Here's to Life, the title song (lyrics by Phyllis Molinary, music by Artie Butler) of which became her signature song. A video documentary of Horn's life and music was released at the same time as "Here's To Life" and shared its title. At the time, arranger Johnny Mandel commented that Horn's piano skill was comparable to that of the noted jazz great Bill Evans. A follow-up was made in 2001, named You're My Thrill.

Horn worked with the same rhythm section for 25 years: Charles Ables (bass) and Steve Williams (drums). Don Heckman wrote in the Los Angeles Times (February 2, 1995) about "the importance of bassist Charles Ables and drummer Steve Williams to Horn's sound. Working with boundless subtlety, following her every spontaneous twist and turn, they were the ideal accompanists for a performer who clearly will tolerate nothing less than perfection".

Her albums Here's to Life, Light Out of Darkness (A Tribute to Ray Charles) and I Love You, Paris all reached number one on the Billboard jazz charts.[5]

A breast cancer survivor, she had been battling diabetes when she died of complications from the condition, aged 71.[6] She is interred at Ft. Lincoln Cemetery in Washington, D.C.[7]

Horn was nominated for nine Grammy Awards during her career, winning the Grammy Award for Best Jazz Vocal Performance at the 41st Grammy Awards for I Remember Miles, a tribute to her friend and mentor (the album's cover featuring a Miles Davis drawing of them both).[6]

She was officially recognized by the 109th US Congress for "her many achievements and contributions to the world of jazz and American culture", and performed at The White House for several U.S. presidents. Horn was awarded an honorary Doctor of Music degree from the Berklee College of Music in 2002.

She was awarded the National Endowment for the Arts Jazz Masters Award in 2005 (the highest honors that the United States bestows upon jazz musicians).

With The Legacy Band

This article uses material from the article Shirley Horn from the free encyclopedia Wikipedia and it is licensed under the GNU Free Documentation License.

Bei mir bist du schön SwingStringS
Update Required To play the media you will need to either update your browser to a recent version or update your Flash plugin.