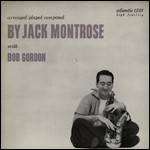 Jack Montrose (December 30, 1928 – February 7, 2006) was a jazz tenor saxophonist and arranger. After attending college in Los Angeles, he worked with Jerry Gray and then Art Pepper. Montrose also did arrangements for Clifford Brown. He became known for cool jazz and/or West coast jazz.[1]

Montrose was born in Detroit. Beginning in the mid-1950s Montrose's heroin addiction became a liability and by the time he had overcome it his style of jazz was no longer popular. This led him to play in strip joints for a time until he relocated to Las Vegas where he worked in casinos. Montrose returned to recording in 1977 and in 1986 had some success in collaboration with Pete Jolly.[2]

He died in Las Vegas.

This article uses material from the article Jack Montrose from the free encyclopedia Wikipedia and it is licensed under the GNU Free Documentation License.

Broadway Geraldine De Haas
Update Required To play the media you will need to either update your browser to a recent version or update your Flash plugin.