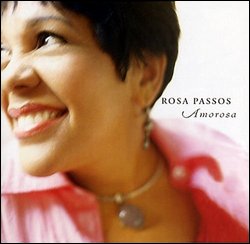 Passos began playing piano at age thirteen, but after listening to Dorival Caymmi and João Gilberto she abandoned the instrument to become a singer. In the late 1960s, she began appearing on television and at music festivals. In 1972 she submitted the song "Mutilados" under a pseudonym to the Globo Network's Festival Universitario and won first prize.[1] She recorded her debut album in 1978, working with poet Fernando de Oliveira. A follow-up effort, Amorosa, followed nine years later, in 1988. In the 1990s she recorded several albums of songs by her major influences. She toured Europe in 1999 with Paquito D'Rivera and on her own in Europe and Japan in 2000.[1] In 2004, Amorosa was re-released, and attracted notice in the United States, reaching No. 7 on the Billboard World Music album chart.[1] In 2008, Passos was awarded an Honorary Doctorate of Music from Berklee College of Music along with Philip Bailey and Maurice White of Earth, Wind & Fire, British musician Steve Winwood, and Berklee alumnus Howard Shore. [2]

This article uses material from the article Rosa Passos from the free encyclopedia Wikipedia and it is licensed under the GNU Free Documentation License.

Summertime Super Trio
Update Required To play the media you will need to either update your browser to a recent version or update your Flash plugin.