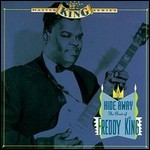 Freddie King (September 3, 1934 – December 28, 1976) was an American blues guitarist and singer. He has been described as one of the "Three Kings" of electric blues guitar, along with Albert King and B.B. King.[1] He was an influential guitarist with hits for Federal Records in the early 1960s. His soulful and powerful voice and distinctive guitar style inspired countless musicians, particularly guitarists (Eric Clapton is a notable example). He was inducted into the Rock and Roll Hall of Fame in 2012.

King based his guitar style on Texas blues and Chicago blues influences. His best-known recordings include the singles "Have You Ever Loved a Woman" (1960) and his Top 40 hit "Hide Away" (1961) and albums such as the early, instrumental-packed Let's Hide Away and Dance Away with Freddy King (1961) and Burglar (1974), which displayed his mature versatility as both a guitarist and a singer in a range of blues and funk styles. He was one of the first bluesmen to have a multiracial backing band at live performances.[2]

According to his birth certificate he was named Fred King, and his parents were Ella Mae King and J. T. Christian.[3] When Freddie was six years old, his mother and his uncle began teaching him to play the guitar. In autumn 1949, he and his family moved from Dallas to the South Side of Chicago.[4]

In 1952 King started working in a steel mill. In the same year he married another Texas native, Jessie Burnett. They had seven children.[5][6]

Almost as soon as he had moved to Chicago, King started sneaking into South Side nightclubs, where he heard blues performed by Muddy Waters, Howlin' Wolf, T-Bone Walker, Elmore James, and Sonny Boy Williamson. King formed his first band, the Every Hour Blues Boys, with the guitarist Jimmie Lee Robinson and the drummer Frank "Sonny" Scott. In 1952, while employed at a steel mill, the eighteen-year-old King occasionally worked as a sideman with such bands as the Little Sonny Cooper Band and Earl Payton's Blues Cats. In 1953 he recorded with the latter for Parrot Records, but these recordings were never released. As the 1950s progressed, King played with several of Muddy Waters's sidemen and other Chicago mainstays, including the guitarists Jimmy Rogers, Robert Lockwood Jr., Eddie Taylor, and Hound Dog Taylor; the bassist Willie Dixon; the pianist Memphis Slim; and the harmonicist Little Walter.

In 1956 he cut his first record as a leader, for El-Bee Records. The A-side was "Country Boy", a duet with Margaret Whitfield.[7] The B-side was a King vocal. Both tracks feature the guitar of Robert Lockwood, Jr., who during these years was also adding rhythm backing and fills to Little Walter's records.[8]

King was repeatedly rejected in auditions for the South Side's Chess Records, the premier blues label, which was the home of Muddy Waters, Howlin' Wolf, and Little Walter. The complaint was that King sang too much like B.B. King. A newer blues scene, lively with nightclubs and upstart record companies, was burgeoning on the West Side, though. The bassist and producer Willie Dixon, during a period of estrangement from Chess in the late 1950s, asked King to come to Cobra Records for a session, but the results have never been heard. Meanwhile, King established himself as perhaps the biggest musical force on the West Side. He played along with Magic Sam and reputedly played backing guitar, uncredited, on some of Sam's tracks for Mel London's Chief and Age labels,[9] though King does not stand out on them.

In 1959 King got to know Sonny Thompson, a pianist, producer, and A&R man for Cincinnati's King Records. King Records' owner, Syd Nathan, signed King to the subsidiary Federal Records in 1960. King recorded his debut single for the label on August 26, 1960: "Have You Ever Loved a Woman" backed with "You've Got to Love Her with a Feeling" (again credited as "Freddy" King). From the same recording session at the King Studios in Cincinnati, Ohio, King cut the instrumental "Hide Away," which the next year reached number 5 on the R&B chart and number 29 on the Pop chart, an unprecedented accomplishment for a blues instrumental at a time when the genre was still largely unknown to white audiences. It was originally released as the B-side of "I Love the Woman". "Hide Away" was King's melange of a theme by Hound Dog Taylor and parts by others, such as "The Walk", by Jimmy McCracklin, and "Peter Gunn", as credited by King. The title of the tune refers to Mel's Hide Away Lounge, a popular blues club on the West Side of Chicago.[10] Willie Dixon later claimed that he had recorded King performing "Hide Away" for Cobra Records in the late 1950s, but such a version has never surfaced.[11] "Hide Away" became a blues standard.

After their success with "Hide Away," King and Thompson recorded thirty instrumentals, including "The Stumble," "Just Pickin'," "Sen-Sa-Shun," "Side Tracked," "San-Ho-Zay," "High Rise," and "The Sad Nite Owl".[12][13] They recorded vocal tracks throughout this period but often released the tunes as instrumentals on albums.

During the Federal period, King toured with many notable R&B artists of the day, including Sam Cooke, Jackie Wilson, and James Brown.

King's contract with Federal expired in 1966, and his first overseas tour followed in 1967. His availability was noticed by the producer and saxophonist King Curtis, who had recorded a cover of "Hide Away," with Cornell Dupree on guitar, in 1962. Curtis signed King to Atlantic in 1968, which resulted in two LPs, Freddie King Is a Blues Master (1969) and My Feeling for the Blues (1970), produced by Curtis for the Atlantic subsidiary Cotillion Records.[14]

In 1969 King hired Jack Calmes as his manager, who secured him an appearance at the 1969 Texas Pop Festival, alongside Led Zeppelin and others,[15] and this led to King's signing a recording contract with Shelter Records, a new label established by the rock pianist Leon Russell and the record producer Denny Cordell. The company treated King as an important artist, flying him to Chicago to the former Chess studios to record the album Getting Ready and providing a lineup of top session musicians, including Russell.[16] Three albums were made during this period, including blues classics and new songs, such as "Goin' Down," written by Don Nix.[17]

King performed alongside the big rock acts of the day, such as Eric Clapton[18] and Grand Funk Railroad (whose song "We're an American Band" mentions King in its lyrics), and for a young, mainly white audience, along with the white tour drummer Gary Carnes, for three years, before signing with RSO Records. In 1974 he recorded Burglar, for which Tom Dowd produced the track "Sugar Sweet" at Criteria Studios in Miami, with the guitarists Clapton and George Terry, the drummer Jamie Oldaker and the bassist Carl Radle. Mike Vernon produced the other tracks.[19] Vernon also produced a second album for King, Larger than Life,[20] for the same label. Vernon brought in other notable musicians for both albums, such as Bobby Tench of the Jeff Beck Group, to complement King.[21]

Nearly constant touring took its toll on King—he was on the road almost 300 days out of the year. In 1976 he began suffering from stomach ulcers. His health quickly deteriorated, and he died on December 28 of complications of this illness and acute pancreatitis, at the age of 42.

According to those who knew him, King's untimely death was due to stress, a legendary "hard-partying lifestyle",[22][23] and poor diet (he was in the habit of consuming Bloody Marys rather than solid food so as not to waste time when setting up shows).

King had an intuitive style, often creating guitar parts with vocal nuances.[24] He achieved this by using the open-string sound associated with Texas blues and the raw, screaming tones of West Side, Chicago blues. King's combination of the Texas and Chicago sounds gave his music a more contemporary feel than that of many Chicago bands who were still performing 1950s-style music, and he befriended the younger generation of blues musicians. In his early career he played a gold-top Gibson Les Paul with P-90 pickups through a Gibson GA-40 amplifier. He later played Gibson ES-355 guitars,[25] using a plastic thumb pick and a metal index-finger pick to achieve an aggressive finger attack, a style he learned from Jimmy Rogers.

By proclamation of the governor of Texas, Ann Richards, September 3, 1993, was declared Freddie King Day, an honor reserved for Texas legends, such as Bob Wills and Buddy Holly.[26]

He was inducted into the Rock and Roll Hall of Fame in 2012.

This article uses material from the article Freddie King from the free encyclopedia Wikipedia and it is licensed under the GNU Free Documentation License.