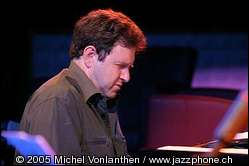 Bruce Barth, born September 7, 1958 in Pasadena, California, is a jazz pianist.[1][2] He has played the piano since the age of five. Barth's career had included major work with ensembles, as well as solo work. Throughout his career, he has played on the Enja, Double-Time, Fresh Sound, and MAXJAZZ labels.

This article uses material from the article Bruce Barth from the free encyclopedia Wikipedia and it is licensed under the GNU Free Documentation License.

Body And Soul Marc Fosset Trio
Update Required To play the media you will need to either update your browser to a recent version or update your Flash plugin.