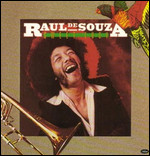 American producer, composer and pianist, George Duke, was brought in to produce de Souza's first and second album releases for Capitol in the mid-1970s, Sweet Lucy and Don't Ask My Neighbors. In 1979, Souza released 'Til Tomorrow Comes, an Arthur Wright production with many of the top soul session players in Los Angeles. This recording was devoid of any jazz and was an effort to jump aboard the disco/funk bandwagon. Colors, his earlier album for Milestone, is available on CD as part of the Original Jazz Classics series from Fantasy Records.

In the early 1960s, he was a member of Sérgio Mendes’ original Bossa Rio group. In the late ’60s, a second, more pop-oriented Bossa Rio group was led by keyboardist Manfredo Fest (Mendes was the producer of their two albums).

He has appeared at many international jazz festivals and after living and working in the United States for many years, he has returned to live in Brazil where he continues to play and compose.

This article uses material from the article Raul de Souza from the free encyclopedia Wikipedia and it is licensed under the GNU Free Documentation License.

I'm Getting Sentimental Over You Frank Vignola Trio
Update Required To play the media you will need to either update your browser to a recent version or update your Flash plugin.