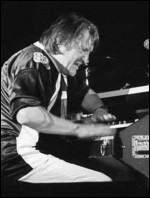 Brian Albert Gordon Auger[1] (born 18 July 1939 in Hammersmith London)[2] is an English jazz and rock keyboardist, who has specialised in playing the Hammond organ.

A jazz pianist, bandleader, session musician and Hammond B3 player, Auger has played or toured with artists such as Rod Stewart, Tony Williams, Jimi Hendrix,[3] John McLaughlin, Sonny Boy Williamson, Led Zeppelin, Eric Burdon and others. He has incorporated jazz, early British pop, R&B, soul music and rock, and he has been nominated for a Grammy.

In 1965 Auger formed the group The Steampacket, along with Long John Baldry, Julie Driscoll, Vic Briggs and Rod Stewart. Due to contractual problems there were no official recordings made by the band; nevertheless, nine tracks were laid down for promotional use in late 1965 and enclosed on a cd by Repertoire Records (1990) (Licensed from Charly Records) as well as 12 live tracks from "Live at the Birmingham Town Hall, February 2, 1964. Soon thereafter the band broke up and shortly after Stewart left in 1966. In 1965, Auger played on For Your Love by The Yardbirds.

With Driscoll and the band, Trinity, he went on to record several hit singles, notably a cover version of David Ackles' "Road to Cairo" and Bob Dylan's "This Wheel's on Fire", which was featured on Dylan Covered. In 1969 Auger, Driscoll and Trinity appeared performing in the United States on the nationally telecast NBC television network special 33⅓ Revolutions Per Monkee.

In 1970, he formed the jazz fusion ensemble Brian Auger's Oblivion Express shortly after abandoning the abortive "Wassenaar Arrangement" jazz rock commune in a small suburb of The Hague. Oblivion Express cultivated the talents of several notable musicians, including future Average White Band drummers Robbie McIntosh and Steve Ferrone, as well as guitarist Jim Mullen. Likewise, in 1971 he produced and appeared on Mogul Thrash's only album, Mogul Thrash. Two members of that band, Roger Ball and Malcolm Duncan, would go on to form the Average White Band.

Brian Auger toured with Kim Simmonds, Gregg Errico, and Tim Bogert in the mid 1980s, in a band they called Maestro. No album resulted from this collaboration/tour.

In 1986, he played keyboards for the Italian singer Mango on the album Odissea.

Auger toured with blues rocker Eric Burdon in the early 1990s, and recorded the live album Access All Areas with him in 1993. After several projects, including albums with family members, he reformed Oblivion Express in the late 1990s, with a line-up that eventually featured both his son and daughter.

Oblivion Express was revived in 2005 with recording and subsequent touring. The group featured Brian Auger, his son Karma Auger on drums, his daughter Savannah Auger on vocals, and Derek Frank on bass.

In 2012, Auger released one of the few solo albums of his career, Language of the Heart, produced by Tea. It features Jeff "Skunk" Baxter and Julian Coryell on guitars.

In 2014 Brian Auger and Oblivion Express played at the KJAZZ festival in Los Angeles and toured in Japan and Europe with the following line-up: son Karma Auger on drums, daughter Ali Auger on vocals, Alex Ligertwood on vocals, Yarone Levy on guitar, Les King on bass and Travis Carlton on bass.[4]

This article uses material from the article Brian Auger from the free encyclopedia Wikipedia and it is licensed under the GNU Free Documentation License.