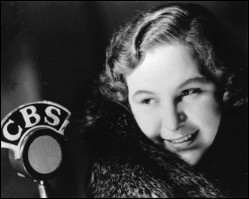 Kathryn Elizabeth Smith (May 1, 1907 – June 17, 1986) known professionally as Kate Smith and The First Lady of Radio was an American singer, a contralto, best known for her rendition of Irving Berlin's "God Bless America". Smith had a radio, television, and recording career spanning five decades, which reached its pinnacle in the 1940s. Kate Smith became known as The Songbird of the South after her enduring popularity during World War II and contribution to American Culture and patriotism.

Smith was born in Greenville, Virginia. Smith began recording in 1926. Her professional musical career began in 1930, when she was discovered by Columbia Records vice president Ted Collins, who became her longtime manager in 50-50 partnership. She later credited Collins with helping her overcome her self-consciousness, writing, "Ted Collins was the first man who regarded me as a singer, and didn't even seem to notice that I was a big girl."[1] She noted, "I'm big, and I sing, and boy, when I sing, I sing all over!"[1]

In 1932, Smith appeared in 1932 in Hello Everybody!, with co-stars Randolph Scott and Sally Blane, and in the 1943 wartime movie This is the Army she sang "God Bless America".

The Kate Smith Hour was a leading radio variety show, offering comedy, music and drama with appearances by top personalities of films and theater for eight years (1937–45). The show's resident comics, Abbott and Costello and Henny Youngman, introduced their comedy to a nationwide radio audience aboard her show, while a series of sketches based on the Broadway production of the same name led to The Aldrich Family as separate hit series in its own right in 1940.

Smith continued on the Mutual Broadcasting System, CBS, ABC, and NBC, doing both music and talk shows on radio until 1960.

From January 25 to July 18, 1960, she hosted The Kate Smith Show, a variety program on the CBS Television Monday evening schedule.[2]

Because of her popularity, Smith's face was a common sight in print advertisements of the day. Over the years, she acted as a commercial spokesman for numerous companies such as Studebaker, Pullman, Diamond Crystal Salt, and Jell-O.[3]

Smith's figure wasn't the only satire target. Her cheery radio sign-on was parodied by comedian Henry Morgan when he launched his own show in 1942: "Good evening, anybody, here's Morgan," which became his sign-on. Morgan would recall in his memoir, Here's Morgan, that Smith's sign-on struck him as condescending: "I, on the other hand, was grateful if anybody was listening."

When the Philadelphia Flyers hockey team played Smith's rendition of "God Bless America" before their game on December 11, 1969, an unusual part of her career began. The team began to play the song before home games every once in a while; the perception was that the team was more successful on these occasions, so the tradition grew.

At the Flyers' home opener against the Toronto Maple Leafs on October 11, 1973, she made a surprise appearance to perform the song in person and received a tremendous reception. The Flyers won that game by a 2-0 score. She again performed the song at the Spectrum in front of a capacity crowd of 17,007 fans before Game 6 of the Stanley Cup Finals on May 19, 1974 against the Boston Bruins. Before that game, Smith had a "Flyer Record" of 36-3-1. Boston's forward, Phil Esposito, infamously tried to jinx the Flyers' "good luck charm" by presenting her with a bouquet of roses after her performance. The Flyers won their first of two back-to-back Stanley Cups, winning that playoff series against the Boston Bruins 4 games to 2, with Bernie Parent shutting the Bruins out 1-0 in that game.

The Flyers' record when "God Bless America" is played or sung in person stands at a remarkable 94 wins, 26 losses, and 4 ties as of April 26, 2011.[4] Smith and her song remain a special part of Flyers' history. In 1987, the team erected a statue of Smith outside their arena at the time, the Spectrum, in her memory. The Flyers still show a video of her singing "God Bless America" in lieu of "The Star Spangled Banner" for good luck before important games. The video of her performance is now accompanied by Lauren Hart, daughter of the late Hockey Hall of Fame broadcaster, Gene Hart, longtime voice of the Flyers, and anthem singer for the Flyers. Before games whenever God Bless America is performed, Lou Nolan, the PA announcer for the Flyers at Wells Fargo Center would say: "Ladies and gentlemen, at this time, we ask that you please rise and remove your hats and salute to our flags and welcome the number 1 ranked anthemist in the NHL, Lauren Hart, as she sings (if the visiting team is from Canada, O Canada (or Canadian national anthem) followed by) God Bless America, accompanied by the great Kate Smith."[5]

Smith's plump figure made her an occasional object of derision; however, late in her career, Philadelphia Flyers hockey fans said about her appearance before games, "It ain't BEGUN 'til the fat lady sings!" Smith was 5'10" tall and weighed 235 pounds at the age of 30.[6] She titled her 1938 autobiography Living in a Great Big Way.

Kate Smith was the Grand Marshal for the 1976 Rose Bowl parade and game. She sang "God Bless America" before the Ohio State-UCLA game at the Rose Bowl, which UCLA won 23-10.

Smith, who never married, rented various apartments in New York City during her long career. She had a home in Arlington, Virginia, and kept a summer home on a small island in Lake Placid, New York.[7]

In 1969, in light of Jim Morrison's arrest in Miami for indecent exposure, Smith performed with The Lettermen, Anita Bryant, and Jackie Gleason in a concert demonstration against indecency, for which President Richard Nixon commended the stars' performances. (Source: Rock Almanac Copyright 1983.)

In her later years, Smith was impaired by diabetes. In 1976, she suffered brain damage after slipping into a diabetic coma. In January 1986, both of her legs were amputated due to poor circulation caused by diabetes. Five months later, she underwent a mastectomy.[8] On June 17, 1986, Smith died of respiratory arrest at Raleigh Community Hospital in Raleigh at the age of 79.[9]

For over a year following her death, Smith's remains were stored in a vault at St. Agnes Cemetery in Lake Placid, while officials of St. Agnes Roman Catholic Church and the singer's executors engaged in a dispute over Smith's request to be buried in a mausoleum on the cemetery's grounds. Her private burial service took place on November 14, 1987.[10]

In 2010 a U.S. commemorative stamp was issued featuring stamp art duplicating artwork created for the cover of a CD titled, Kate Smith: The Songbird of the South. The artwork was based on a photograph of Smith taken in the 1960s.[13]

On July 21, 2011, Smith's version of "God Bless America" was played as NASA's final wake up call for the space shuttle Atlantis, ending the 30-year shuttle program.

The voice of Kate Smith is known and loved by millions of Americans, young and old. In war and peace, it has been an inspiration. Those simple but deeply moving words, 'God bless America,' have taken on added meaning for all of us because of the way Kate Smith sang them. Thanks to her they have become a cherished part of all our lives, an undying reminder of the beauty, the courage and the heart of this great land of ours. In giving us a magnificent, selfless talent like Kate Smith, God has truly blessed America.[14]

This article uses material from the article Kate Smith from the free encyclopedia Wikipedia and it is licensed under the GNU Free Documentation License.

These Foolish Things RBQ René Bondt Quintet
Update Required To play the media you will need to either update your browser to a recent version or update your Flash plugin.