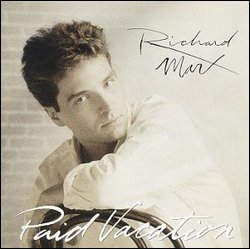 Richard Noel Marx (born September 16, 1963) is an American adult contemporary and pop/rock singer, songwriter, musician and record producer who has sold over 30 million records. He had a stream of hit singles in the late 1980s and 1990s, including "Endless Summer Nights," "Right Here Waiting," "Now and Forever," "Hazard" and "At the Beginning" with Donna Lewis. Although some of his major hit songs were ballads, many of his songs have had a classic rock style, such as "Don't Mean Nothing," "Should've Known Better," "Satisfied," and "Too Late to Say Goodbye."

Marx placed himself in the record books by being the first solo artist to have his first seven singles hit the Top 5 on the Billboard Hot 100 singles chart (3, 3, 2, 1, 1, 1, 4). His record sales worldwide exceed 30 million.[2] He has also written or collaborated on songs with other artists such as "This I Promise You" by NSYNC and "Dance With My Father" by Luther Vandross. The latter song won several Grammy Awards.[3] His 14th and latest chart topper, "Long Hot Summer," performed by Keith Urban, gave Marx the distinction of having a song he wrote or co-wrote top the charts in four different decades.[4]

Marx was born in Chicago, Illinois, the only child of Ruth (née Guildoo), a former singer, and Dick Marx, a jazz musician and founder of a successful jingle company in the early 1960s.[5] He has three half-siblings from his father's previous marriage.[6]

Marx began his career in music at the age of 5, singing commercial jingles written by his father's company; its list of advertising hits includes Arm & Hammer, Ken-L Ration[7] and Nestlé Crunch.

Marx was 17 and living in Highland Park, Illinois when a tape of his songs ended up in the hands of Lionel Richie. Richie thought Marx had the talent and told the teen, "I can't promise you anything, but you should come to L.A." [8] After graduating from North Shore Country Day School in 1981, Marx moved to Los Angeles and visited Richie.

Marx initially sang backing vocals for various artists, and also had a minor acting role in the television movie Coach Of The Year, which starred Robert Conrad. He was singing for Kenny Rogers in 1984 when he overheard Rogers say he needed a new song. Within days, Marx gave him the demo of "Crazy." Rogers recorded it, along with another of Marx’s songs, "What About Me?" This also featured James Ingram and Kim Carnes. The trio recording hit #1 Adult Contemporary and #15 on the Billboard Hot 100 (while just scraping onto the Country and R&B charts) in late 1984 while "Crazy" hit #1 Country and #5 AC the following year. Soon after, Marx began working with producer David Foster and writing songs for the group Chicago and R&B singer Freddie Jackson.

While working as a songwriter and doing background vocals, Marx continued to pursue his own record deal. His demo tape was rejected by every label in Hollywood until, finally, four years after moving to Los Angeles, the president of EMI/Manhattan Records, Bruce Lundvall, signed him. Marx contacted his friend Fee Waybill, frontman of The Tubes, and some other musicians, including Joe Walsh, and Randy Meisner of the Eagles, to create a ten-track debut album.

Marx's self-titled debut album, released in June 1987, yielded four hit singles and sold nearly four million copies in the US. The debut single, "Don't Mean Nothing," about the potential pitfalls of the music business, had been released the previous month, and it climbed to #3 on the Billboard Hot 100 as well as #1 on Billboard's Album Rock charts. Marx became the first new artist played on 117 radio stations nationwide during his initial week on the charts. The next two singles, "Should’ve Known Better" and "Endless Summer Nights" reached #3 and #2, respectively. The fourth single release, "Hold On to the Nights," earned Marx his first #1 Pop single.

With the success of his self-titled album, he embarked on his first world tour, initially opening for REO Speedwagon, but quickly began headlining his own shows. His first tour kept him on the road for 14 months.

In 1988, Marx was nominated for a Grammy Award for 'Best Rock Vocal Performance - Solo' for "Don’t Mean Nothing."[9]

Repeat Offender, Marx’s second album, was released in May 1989. It rose to #1 on Billboard's album chart. It went triple platinum within a few months and eventually sold over 5 million copies in the United States alone. The first two singles, "Satisfied" and the platinum-selling "Right Here Waiting," both reached #1.

"Right Here Waiting" has been covered numerous times, most notably by Monica and 112 in a 1998 duet. Another single from the album, "Children of the Night," was written and composed in support of a Van Nuys-based organization for runaways. It became the sixth single from Repeat Offender,.

Marx went on to release a number of other albums. In 1991 he released his third consecutive platinum album, Rush Street. This album saw artists such as Luther Vandross and Billy Joel appear as backing vocalists and guest pianists. The disc's first single, "Keep Coming Back," went to #12 pop as well as #1 on Billboard's Adult Contemporary charts for 4 weeks running.

In early 1994, as he and his family permanently left Los Angeles behind and returned to Chicago, Marx released Paid Vacation, and scored his fourth consecutive platinum album. The acoustic ballad "Now and Forever" peaked at #7 on the Hot 100.

The year 1997 saw the release of Flesh and Bone, Marx's final studio album on the Capitol imprint.

Marx's Greatest Hits compilation was released in November 1997. The 16-track album includes a variety of hit singles from his first five albums plus "Angel’s Lullaby," a song written about his children originally appearing on For Our Children, Too, a compilation CD released in 1996 to benefit the Pediatric AIDS Foundation. Greatest Hits was released in Asia in November 1998 and included two new songs, "Slipping Away" and "Thanks To You," a tribute to his mother. Marx’s dedication and support of numerous charities has continued throughout his career.

My Own Best Enemy

After signing a new deal with his former label, Manhattan Records, Marx released the 2004 album My Own Best Enemy.

In 2008, Marx released Duo, on which he collaborated with Vertical Horizon's lead singer, Matt Scannell.

On October 31, 2008, "Emotional Remains" and "Sundown" were released, as digital downloads, on Marx's official site.

In March 2010, Stories To Tell was released during Marx's solo acoustic concerts. It was the first fully acoustic album he ever recorded or released, and it featured several songs from several of his previous albums. In November 2010, Stories to Tell album was released in Europe in support of Marx's European tour. The European release featured all the songs from the March release and new studio recordings of songs that Marx had written and or composed with, or for, such other artists as Josh Groban and Keith Urban.

On May 3, 2011, the reissue of Stories to Tell was released in the United States as a three-disc set exclusively through Walmart. The set included a "best of" disc, an acoustic disc of tracks, and a DVD of a live concert performance at the Shepherd's Bush venue in England. The album was also made available for purchase on iTunes and Amazon, but without the bonus DVD and album booklet. "Everybody" was released as a single in Europe and "When You Loved Me" was released in the US, peaking in the Top 20 on the Adult Contemporary chart.[11]

On November 1, 2011, Marx released The Christmas EP, a five-song collection of Christmas songs. "Christmas Spirit," written and composed jointly by Marx and Fee Waybill, was the first single released for radio airplay.

In October 2012, Marx followed up The Christmas EP with a full album of holiday tracks that he called Christmas Spirit.

The album included three songs ("Suddenly," "Have A Little Faith," and "To My Senses") that had all previously appeared on Sundown in 2008.

"Whatever We Started" was released as a digital single in May, 2014. It peaked at #29 on Billboard's Adult Contemporary chart. The title track was released on September 13, 2014. (A bonus track, "Just Go," had previously been released as a single on February 14, 2013.)

On June 12, 2008 Marx was part of a PBS television series called "Songwriters In The Round Presents: Legends & Lyrics." In Episode 102 of the first season, Marx appeared along with Kenny Loggins, Nathan Lee, and rock band Three Doors Down. This episode also featured an interview with singer-songwriter Diane Warren.[12][13][14]

On December 6, 2008, Marx headlined a fundraiser for Cystic Fibrosis research, "Newsapalooza," sponsored by WLS-AM's Roe Conn program, in which Marx both performed several of his hits with his band and accompanied Chicago broadcast news reporters and anchors covering rock hits.[15]

In an interview published in Rolling Stone Magazine on June 26, 2009, Marx said he was "ashamed" of having been linked to a $1.92 million fine against single mother Jammie Thomas-Rasset by the Recording Industry Association of America (RIAA). Rasset had shared 24 songs on the file-sharing website Kazaa in 2005, and Marx's "Now and Forever" was one of them.[16]

On May 3, 2011, Marx was invited onto stage at the Curran Theater, San Francisco, by Hugh Jackman. It was opening night of Hugh Jackman In Performance. When introducing the mystery guest, Jackman said that the person was instrumental in helping him put the show together and rehearse, and that he had been on at least 4 occasions in this person's living room practicing. The mystery guest was revealed to be Marx. They then sang "Right Here Waiting" together with Marx changing the lyrics on the last chorus to "Right here waiting for Hugh."

In the summer of 2011, Marx collaborated with the comedy internet duo Rhett and Link, producing a celebrity endorsement for a colon cleansing spa in Sacramento, CA. The ad spot and its "making of" was featured on an episode of Rhett and Link's series on IFC.[19]

On 21 December 2016, it was reported that Marx had helped Korean Air flight attendants pacify an unruly, possibly intoxicated passenger while he and his wife were aboard a flight bound from Hanoi to Seoul,[21][22] even providing photographic evidence of the incident.[23][24][25] He had also criticized the airline company towards what was considered to be an inept handling of the situation. In response to this, Korean Air had said in a press conference that they will be more aggressive towards passengers exhibiting similar violent behaviour, even to hiring more male flight attendants and "readily use stun guns" in case of more serious measures.[26]

On January 8, 1989, Marx married the singer/dancer/actress Cynthia Rhodes.[1] Rhodes acted and sang in Staying Alive (1983), Flashdance (1983), and most notably in the 1987 blockbuster Dirty Dancing, as well as appearing as the female lead in Marx's first video, "Don't Mean Nothing." The couple has three sons — Brandon (born 1990), Lucas (born 1992), and Jesse (born 1994) — and had previously resided in Lake Bluff, Illinois. He currently resides in Malibu, California. In April 2014, the couple announced the dissolution of their 25-year marriage.[28] On December 23, 2015, Marx married Daisy Fuentes in Aspen, Colorado, as confirmed on his official Facebook page.[29]

This article uses material from the article Richard Marx from the free encyclopedia Wikipedia and it is licensed under the GNU Free Documentation License.

Isn't She Lovely Raphael Jost Standards Trio
Update Required To play the media you will need to either update your browser to a recent version or update your Flash plugin.