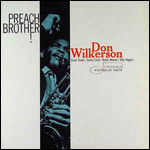 Don Wilkerson (c. 1932 – 18 July 1986) was an American soul jazz / R&B tenor saxophonist born in Moreauville, Louisiana, probably better known for his Blue Note Records recordings in the 1960s as bandleader with guitarist Grant Green. Prior to signing with the label, he worked frequently with Cannonball Adderley. Some of his earliest recordings were done in the 1950s as a sideman for Amos Milburn and Ray Charles.[1]

In Houston in the early 1970s, he played in the Sonny Franklin Big Band with Tom Archia, Arnett Cobb, and his bandmate from the Ray Charles band, Joe Bridgewater,[2] with guest appearances by Eddie "Cleanhead" Vinson and Clarence "Gatemouth" Brown. Many of the band's arrangements were done by Cedric Haywood.[3]

This article uses material from the article Don Wilkerson from the free encyclopedia Wikipedia and it is licensed under the GNU Free Documentation License.